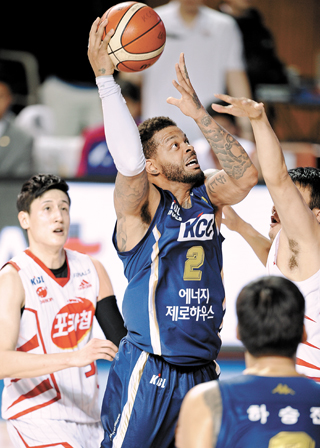 Andre Emmett of Jeonju KCC Egis goes up for a layup to help his team salvage its chance to capture the KBL Championship trophy yesterday by defeating Goyang Orion Orions 94-88 in the fifth game of the KBL finals. Although Egis won the first game of the series, the team lost three straight games, putting its shot at the championship title in jeopardy. However, Emmett scored 38 points yesterday to force the series into a sixth game. Egis will travel to Goyang tomorrow to take on the Orions in an away game. [KOREAN BASKETBALL LEAGUE]