Adults under 60 will be granted housing pension

Adults under 60 will be granted housing pension 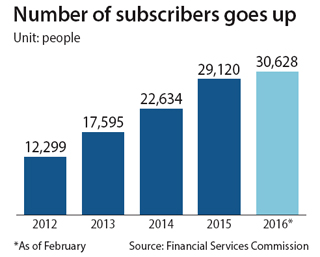 The Financial Services Commission (FSC), Korea’s financial regulator, came up with three plans on Sunday to expand the use of the government-backed reverse mortgage program, which allows citizens over 60 to take out home loans without requiring monthly mortgage payments.

The first of these plans, a revision of the Housing Finance Corporation Act, will allow citizens under 60 to subscribe to the program if their spouses meet the earlier age requirement. It will also help them repay their existing mortgage more easily with their pension plan.

The FSC will implement this starting from April 25.

Known as “housing pension” in Korean, the reverse mortgage program allows homeowners to put up their houses as collateral if those homes are valued at 900 million won ($769,635) or less.

Introduced in 2007, less than 1 percent of otherwise eligible homeowners, or 30,628 households, have subscribed to the program as of February, according to data by the FSC, largely because of the age requirement. The rest, about 18 percent or 62.6 million households, rely on bank mortgages.

In addition to the age restriction, if applicants are on mortgages by commercial banks, they are required to repay all their mortgages before subscribing to the government program. To help them do this, subscribers could formerly withdraw 50 percent of their total estimated pension payouts early.

Under the new regulations, however, pensioners will be permitted to withdraw up to 70 percent of their estimated pension payouts, a change the FSC is enacting in order to attract more potential subscribers.

“Among the elderly, there are many who possess fixed real estate as assets, but they are lacking the liquid assets they need in post-retirement life,” said Sohn Byung-doo, director general of the Financial Policy Bureau at the FSC.

“Since the beginning of this year, there has been increasing demand and awareness of the reverse mortgage program.”

According to the FSC, the latest measure will help reduce overall household debt among older adults by about 22.2 trillion won in the next 10 years, which will result in a 10 trillion won increase in total disposable income.

“Subscribers may think the total sum of monthly payouts is less than the value of their houses,” one official said.

“But considering that they can live in their homes without having to worry about moving costs, as well as the benefit of a regular income provided by the pension plan, regardless of the changing market values for homes, is of great benefit to them.”

If the difference between the home price and the total monthly payouts, which is calculated based on the average life span of Koreans, remains significant after a recipient has passed away, his or her children are then eligible to inherit the remaining sum.

The second proposal targets people in their 40s and 50s by enabling them to get bogeumjari loans, a type of long-term mortgage loan by the state-run financier, which makes pre-subscriptions to the mortgage program.

Those who make pre-subscriptions are awarded a 0.15 percentage point discount for mortgage interest rates.

Finally, the third proposed plan will give more payouts to older adults below certain levels of income. Married couples who own homes valued at 150 million won or less get 8 to 15 percent greater pension payouts per month, according to the government plan.