Ssangyong projects an Air of confidence

Ssangyong projects an Air of confidence 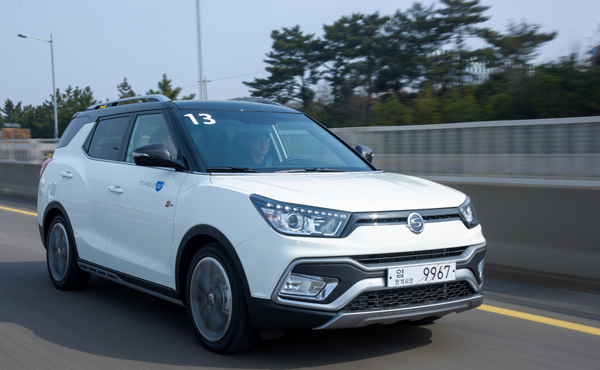 A Tivoli Air SUV during a test drive in Seoul on March 22. [SSANGYONG MOTOR]

Ssangyong Motor’s gamble in the SUV market appears to be paying off.

After making a dramatic recovery in terms of sales in the local market last year with its new small SUV, the Tivoli, the company rolled out the vehicle’s long-body model, the Tivoli Air to maintain its momentum.

According to Ssangyong, it has received 2,200 pre-orders for the Air as of last week and it has sold a total of 5,500 units of the Tivoli series this month.

“We once worried that the Air’s launch would badly influence the sales of other Tivolis, but overall sales for the SUV have been increasing together,” said a spokesman of Ssangyong. 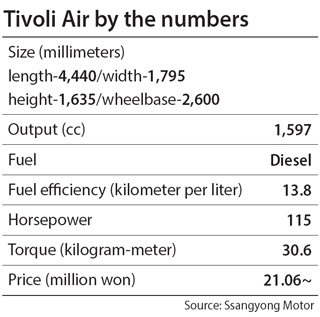 At a glance, the overall size of the SUV, including the truck space, has got bigger to compete with other compact and mid-sized rivals including Hyundai’s Tucscon and Kia Motors’ Sportage. But the driving performance hasn’t been beefed up much, considering its 1.6 diesel based power train.

After rolling out its gasoline version of the Tivoli last year, the nation’s smallest automaker has been promoting the model more like a sub brand by extending its lineup and by launching the long-body Air this year.

The Tivoli Air is the only new car that Ssangyong will introduce this year in the local market.

The Korea JoongAng Daily took the Air for a 100 kilometer (62 mile) test drive last week between the Seoul Marina Club & Yacht in Yeouido in western Seoul and Incheon International Airport.

One of the appealing points for consumers is its trunk space. As the length of the body got 245 millimeters (9.6 inches) longer from the smaller Tivoli to 4,440 millimeters, the trunk space got wider from 425 to 720 liters (25.4 cubic feet). Folding the back seats, the loading space increases to 1,440 liters. The Air also has a 220-volt outlet for outdoor activity fans and electronic devices.

The Tivoli Air’s width (1,795 millimeters) and wheelbase (2,660 millimeters) are the same as the smaller Tivoli, but as its height got 350 millimeters taller, it gives more of a feelings that a driver is actually sitting in a SUV with its higher seating position.

The trunk space got wider from the smaller Tivoli’s 425 to 720 liters. By folding the back seat, the loading space increases to 1,440 liters. The interior design was developed with a D-cut steering wheel. [SSANGYONG MOTOR]

The Air and the smaller SUV share the same 1.6-liter e-XDi 160 diesel engine that offers 115 horsepower and 30.6 kilogram-meter (20.5 pound-foot) of torque. The maximum torque is made between 1,500 and 2,500 rpm, the sections most frequently used in everyday driving.

The Air is about 50 kilograms heavier than the smaller SUV, but the weight hasn’t influenced driving performance, meaning consumers shouldn’t expect any improvements in acceleration.

The Air has good performance in low and middle speed ranges and also shows good riding quality in speeds around 100 kilometers per liter.

Another improvement is the lack of noise and vibration issues that annoyed some consumers with the smaller SUV.

The Air is an alternative for consumers who were not satisfied with the smaller Tivoli’s size.