Minibus service may be driven out of business

Minibus service may be driven out of business

Government red tape may force a homegrown start-up minibus service out of business.

Park Byung-jong, CEO and founder of Callbus Lab, said he has already made numerous concessions required by Seoul Metropolitan Government and now there are further demands.

“The kind of policies Seoul has come up with are never for the sake of the citizens. I wish people in Seoul could be given as many choices as possible and opt for what’s best for them on their own,” he said.

Callbus operates ride-sharing buses in downtown areas in Seoul at night with a smartphone app. Passengers can call a minibus by entering their current location and destination between 10 p.m. and 4 a.m. The minibus, based the company’s self-developed algorithm, adjusts its route real time to pick up the customer heading to nearby destinations.

The pilot transportation service has been available in areas such as Gangnam station, Hongdae and Jongno, since December. Taxi drivers notoriously refuse to take customers for short distances, and some drivers demand higher fares during peak hours in these areas.

More than 15,000 people have used Callbus that is cheaper than taxi and pricier than bus.

Callbus hit a snag earlier this year after the association of taxi drivers in Seoul filed a complaint with the Ministry of Land and Transportation, arguing the service violates Passenger Transport Service Act. There was concern that mini bus drivers would snatch business from regular taxi drivers.

In response, the ministry revised part of the act to allow Callbus to carry on with the scheduled official launch in April and asked the company to make some changes.

Park said he has made as many compromises as possible to sustain his fledgling business.

He has agreed to collaborate with existing Seoul taxi companies and hire their drivers. Only Hyundai Motor’s 13-seat Solati will be used for the service, instead of the cheaper minibuses that the start-up has been renting.

This time, however, the Seoul government has demanded that Callbus make a series of adjustments to its original operation, citing the difficult livelihood of taxi drivers who could potentially be victimized by the new type of ride-sharing. 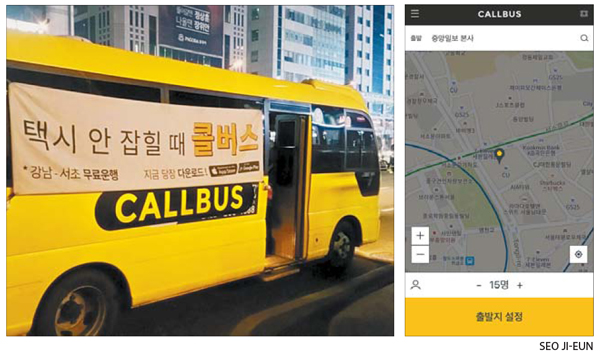 The Callbus app is aimed at customers who find it difficult to get a taxi or regular bus during night time. [SEO JI-EUN]

Some of the changes include Callbus beginning the service at midnight and ending at 5 a.m., which will result in losses, let alone profits, according to Park. The previous operating hours were between 10 p.m. and 4 a.m.

“The period between 9:30 p.m. and 2 a.m. is when the supply for taxis hugely falls short of demand, data from Seoul government shows, and drivers’ refusal of passengers is rampant,” said Park. “We are trying to tackle the problem that the city government is supposed to take care of.”

The ongoing feud is reminiscent of Seoul’s conflict with Uber, an American ride-hailing service, in the past year. Seoul regulators forced the icon of sharing economy to shut down most of its operations here and instead allowed Kakao, a local operator, to launch a similar service called Kakao Taxi.

The head of Seoul Metropolitan Government’s taxi logistics department said it hopes Callbus can help ease the taxi shortage problems in busy areas of the city at peak times.

However, the bureaucrat said there were issues over the reduced income of taxi drivers who he said are stricken with reduced income from a bad economy.