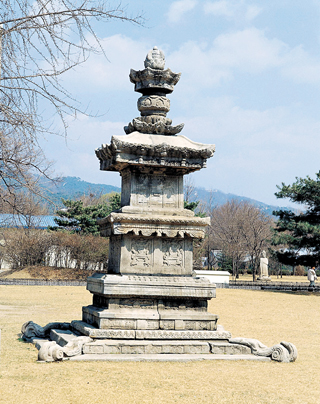 It had been smuggled into Osaka during the early 1910s when Korea was under Japanese colonial rule (1910-45), but was soon returned to be housed in the precincts of Gyeongbokgung Palace where it is today.

Unlike ordinary stupas that came to have an octagonal shape after the Unified Silla era (676-935), this one is basically square in plain view.

The foundation stone has four decorative carvings shaped like a dragon’s clawed foot tugging the ground on all four corners, creating a great sense of stability.

Above the foundation is a base of seven tiers with different heights and widths whose top tier is decorated with elaborately carved draperies over all four sides.

The main body is in turn carved with a pair of doors on the front and back to indicate that it contains a chamber enshrining the relics of the dead monk; the roofstone is gently turned up on all four corners, with all its eaves elaborately carved with Buddhas, bodhisattvas, and phoenixes.

The finial is also in good condition.

While some argue that the stupa has excessive decorations and consequently tends to reduce the solemnity it should maintain as a reliquary monument, it is generally regarded as one of the finest of its kind produced during the Goryeo period (918-1392).