Park to ask Xi to apply pressure on North Korea

Park to ask Xi to apply pressure on North Korea 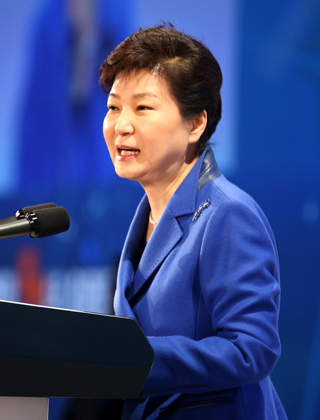 President Park Geun-hye will have a series of bilateral summits with U.S., Chinese and Japanese leaders this week to put more pressure on North Korea to address the communist regime’s latest nuclear and long-range missile tests.

According to the Blue House, Park will meet with Chinese President Xi Jinping on Thursday on the sidelines of the Nuclear Security Summit in Washington. Park will leave for the multilateral conference today.

The summit will be Park’s first meeting with Xi since North Korea’s fourth nuclear test in January and subsequent long-range missile firing in February.

“The two leaders are expected to reaffirm their commitments to further develop the strategic cooperative partnership between the two countries,” Kim Kyou-hyun, senior presidential secretary for foreign affairs and national security, said. “They will also have an in-depth discussion on [Beijing’s] faithful implementation of the UN Security Council resolution and improvement of communication between the two countries on North Korea issues.”

After Park viewed China’s largest-ever military parade in Beijing in September 2015, some observers said the South had replaced the North as China’s favorite Korea.

Park’s efforts, however, did not immediately translate into Beijing putting pressure on Pyongyang, even after the North conducted the fourth nuclear test on Jan. 4, 2016. Frustrated by Beijing’s inaction, Park sent a strong message to China, in which she mentioned Seoul is considering the deployment of a U.S.-led missile shield in the South, which Beijing opposes. Nearly a month after the North’s nuclear test, Park and Xi discussed the North over the phone on Feb. 5, 2016.

The upcoming summit between Park and Xi will be the seventh of its kinds, and expectations are growing that the two countries will be able to restore their cooperation, although it is yet unknown whether the thorny issue of the United States’ deployment of the Terminal High Altitude Area Defense (THAAD) system in the South will be discussed at the Park-Xi meeting.

Ahead of the summit with Xi, Park will meet with U.S. President Barack Obama. According to Kim, the two leaders will discuss efforts to impose more sanctions on the North in addition to the latest UN Security Council resolution.

“This meeting will be an opportunity for the three leaders to discuss common responses to the threat posed by North Korea and to advance areas of trilateral security cooperation in the region and globally,” the White House said.

The trilateral meeting will be the first since their meeting in March 2014 at The Hague.

Following the trilateral meeting, Park will sit down with Abe for their first bilateral summit since November last year. Kim said the two leaders will exchange opinions on bilateral cooperation to counter the North’s nuclear brinkmanship.

Kim did not mention whether the recent settlement between Seoul and Tokyo concerning Japan’s wartime sexual slavery of Korean women would be discussed at the summit.

In the settlement, reached last December, Japan agreed to offer a government apology and a multimillion-dollar fund for victims in a landmark deal.