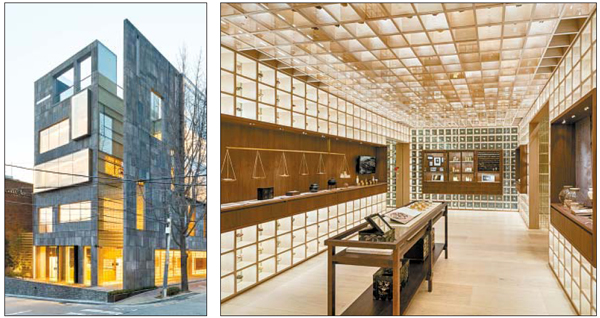 Left: Sulwhasoo’s independent boutique, which opened in Sinsa-dong, southern Seoul, on Wednesday. Right: The first floor of the boutique, the Heritage Room, exhibits a collection of Korean antiques and products reflecting the brand’s philosophy. [AMOREPACIFIC]

It is now the largest cosmetics store for a single brand in Korea.

The high-end brand, which is known for incorporating traditional herbs in its products, launched in 1997 and achieved 1 trillion won ($875 million) in revenue last year - the highest annual revenue ever for a homegrown beauty brand.

The store is located in front of Dosan Park in the trendy shopping area neighboring both Cheongdam-dong and Apgujeong-dong, which accommodates a range of global luxury brands from Hermes to Louis Vuitton. The choice of location is meant to cater to the well-heeled Chinese tourists that have been increasingly visiting the area for shopping.

Designed by Shanghai-based architectural designer duo Neri & Hu, the boutique has golden brass rods surrounding the exterior and interior of the entire building to give it the impression of a giant traditional lantern.

In every corner of the modern-looking store are Korean antiques and furniture previously exhibited at the AmorePacific Museum, including dressing tables and mirrors, to shed light on the lengthy history of the brand. Though only 20 years old, Sulwhasoo’s origins date back to 1966, when AmorePacific debuted its ginseng cream, the first cosmetics product to use traditional Korean herbs.

The right corner of the entrance, modeled after a traditional-medicine pharmacy, shows the brief history of the brand and how ingredients are mixed and processed.

The second floor has a space for a special gift-wrapping service, where clerks pack products with silk cloth and paper sheets in pastel colors in traditional Korean style for between 25,000 won and 45,000 won.

The third floor is devoted to VIPs and cultural events. The scenic rooftop, which oversees Dosan Park, will function as a venue for VIP customers who wish to throw private parties.

In celebration of the opening, the store has begun selling exclusive cosmetics only available at the location, including a set of lotions, serums and creams, four different types of soaps as well as perfumes, potpourri and candles. The fragrances and ingredients range from ginseng to Japanese apricot blossom.

With the new store as a stepping stone, AmorePacific aims to outpace SK II and Shiseido to become Asia’s No. 1 cosmetics brand and one of the top seven global cosmetics brands by 2020.

AmorePacific runs a dozen cosmetics and foods brands, and has been seeing tremendous growth in China on the back of the popularity of Sulwhasoo and its mid-priced brand Innisfree. Analysts expect AmorePacific’s revenue in China this year to increase by up to 40 percent from a year earlier.

“Even though the economy in China is slowing, the cosmetics market has been showing solid growth,” said Yang Ji-hye, an analyst at Meritz Securities.