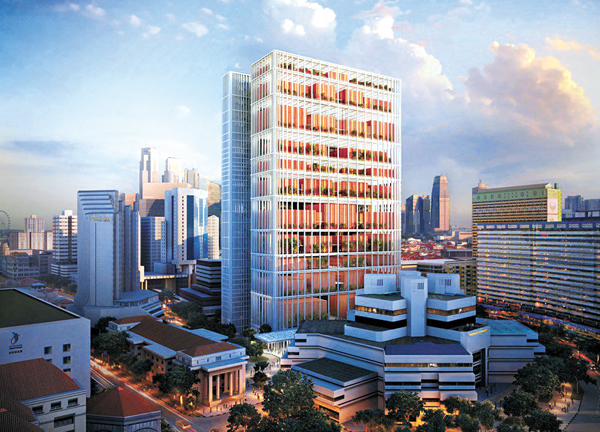 An artist’s rendition of Singapore’s new State Courts complex, set to be completed in 2019 and made operational by 2020. [SAMSUNG C&T]

In February, the corporation secured a 388 billion won contract to build Singapore’s new State Courts complex, followed by a 245 billion won deal to build a 54-story office building in Malaysia. Standing 178 meters (584 feet) tall, the State Courts complex is expected to become a landmark in downtown Singapore. Samsung C&T believes that its past work on high-rise buildings such as the Burj Khalifa, the tallest artificial structure in the world, and the Petronas Twin Towers played a part in its landing the Malaysian project.

On March 18, Samsung C&T landed a 737 billion won deal for construction on section T313 of Singapore’s Thomson-East Coast Line. Under the contract, the company will build a subway station and 1,200-meter-long underground tunnel at Xilin Avenue. The project is expected to be difficult, as Samsung C&T will have to relocate a stream running above the construction site and connect two new subway lines and a car park.

Having worked on a total of nine subway and underground motorway projects in Singapore, Samsung C&T won the contract by presenting the Land Transport Authority with an optimized construction plan. It expects to complete construction by 2024.

Samsung C&T aims to strengthen its position in the Southeast Asian market by localizing and differentiating its services. It attributes its success in the region to the trust-based relationship it has built with clients through years of high quality and safety control.

The company is currently working on 32 projects in six Southeast Asian countries including Singapore and Malaysia, the majority of which are for skyscrapers, power plants and subways. The value of these projects adds up to 10.1 trillion won.

Samsung C&T CEO Choi Chi-hun says the company will continue to achieve growth by winning contracts based on trust, quality and strategic localization.