Two power options in use today

Two power options in use today 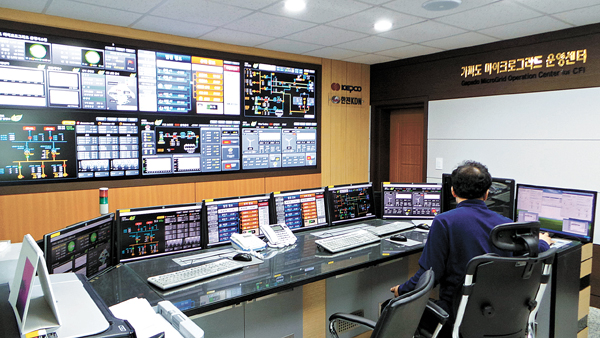 View of a microgrid operating room at the Gapa Island Power Plant near Jeju Island. [NEWSIS]

And at Gunggi Green Energy’s power plant in Hwaseong, Gyeonggi, fuel cells are operating in an area as big as three football fields. As one of the world’s largest fuel cell power generators, it generates about 460,000 megawatt-hours and can supply electricity to 70 percent of households in the region.

Fuel cell energy is generated by using hydrogen and oxygen, and is less affected by climate changes compared to wind or solar energy. Posco and Doosan Group believe that Korea will lead the global fuel cell industry and are investing heavily to develop the technology

“The fuel cell industry is growing 30 percent annually, and its market size is expected to reach 3.8 trillion won [$3.3 billion] in 2023,” said a representative at Doosan Group. “We will get involved in this industry by improving cost competitiveness and by restructuring our production line.”

“It only takes about a year to supply electricity to an area that doesn’t have one by using fuel cells,” said Han Jung-tak, CEO of the company. “The technology will become very useful when Korea is unified since it will be able to solve an electric power shortage problem in North Korea.

“Fuel cell energy is generated using liquefied natural gas [LNG], and it will be a great opportunity for the companies to enter Southeast Asian markets since the gas is very cheap there.”

Microgrids - the localized grouping of electricity sources - require information technology to operate, an area where Korea is already very strong.

Korea began research on the technology about 10 years ago, just like other developed countries. There are already a number of projects going on to make islands and provinces around the nation energy self-sufficient using microgrid technology.

A microgrid facility was first built in Ulleung Island, North Gyeongsang, and its goal is to generate renewable energy by 2020.

The United States plans to invest some $4.5 billion by 2030 to replace its old electricity grid with microgrids. Moreover, the Chinese government is actively involved in some 30 microgrid projects in the nation.

“Korea’s microgrid technology is one of the world’s best, but there aren’t that many places that we can use it,” said Moon Seung-il, a professor at Seoul National University. “The government needs to come up with some kind of institution that manages this technology.”

One of the problems is the price for renewable energy certificates that changes every year. The price changes 80 to 140 won per kilowatt every year, and local companies are having a hard time coming up with long-term plans.

Additionally, fuel cell energy generators have to pay retail prices for LNG since they cannot produce as much energy as large-sized power plants.