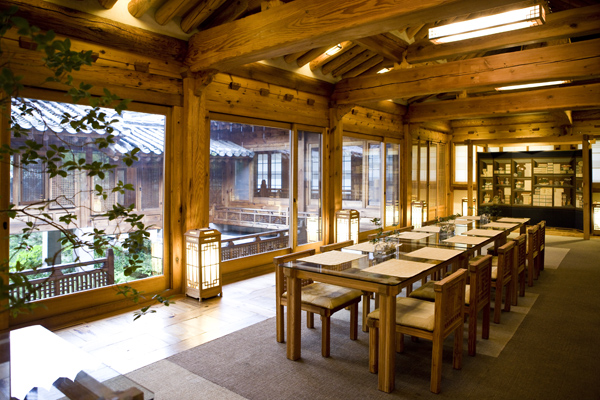 The view of gungjip, the main building of the Korea Furniture Museum in northern Seoul. The building was made with wood from a royal building in Changgyeong Palace. [KWON HYUK-JAE]

Brad Pitt, Zaha Hadid, Victoria Beckham and Chinese president Xi Jinping have one thing in common: They all visited the Korea Furniture Museum during visits to Seoul.

A small museum in Seongbuk-dong, northern Seoul, that by all rights should be far down a list of must-sees in Seoul has become a hot destination, not only among crafts folks wanting to know more about Korean culture, but also among global celebrities and even foreign envoys in Seoul to discuss key matters with their Korean counterparts.

They’re doing it at the furniture museum.

The museum gained a reputation as a diplomatic venue after a lunch meeting was held between French Foreign Affairs Minister Jean-Marc Ayrault and Korean Foreign Minister Yun Byung-se last month as part of their attempts to commemorate the 130th anniversary of diplomatic ties between the two countries. It was the first time the museum hosted an official political discussion between high-level figures, although it has hosted lunches and dinners for foreign delegates that visited Korea, including luncheons for first ladies during the G-20 Summit in Seoul in 2010.

It was a surprise that the French and Korean delegations didn’t choose to meet at a conference room at Korea’s foreign affairs ministry building in Jongno, central Seoul or even at a local hotel, where a forum celebrated the diplomatic ties between the two countries. Instead, they chose a cultural spot. 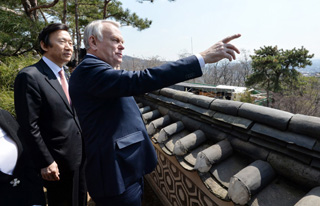 Korea’s foreign ministry explained to the JoongAng Ilbo that it chose the venue to demonstrate its sensitivity to the nation’s foreign friends. Minister Ayrault was visiting Korea for the third time, and it was known that he showed interest in Korea’s traditional culture during his previous visits. To show how Korean culture can harmonize with French culture, the menu for the lunch was not Korean food but local ingredients cooked in the French style.

Many foreign ambassadors to Korea and foreign CEOs are frequent visitors to the museum. One reason is that the museum is located near the residences of many diplomats and foreign businessmen, according to the museum’s director Joshua Jungsun Park.

“The museum is one of the first places many delegates go to become familiar with Korean culture.

There are many ways to define one country’s culture, but we try to show it through houses,” Park said.

“Special elements accumulate over time to make a culture and their traces are shown comprehensively through a house,” Park says.

Many of the hanok were collected by Chyung Mi-sook, founding director of the museum. She and her family bought hanok that were in danger of being demolished. She collected wood used to build hanok and used it for any reconstruction that was needed. True hanok don’t use nails and are built through joinery. 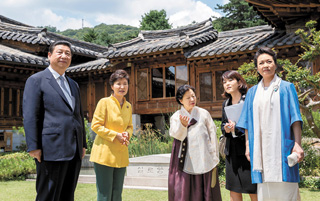 The main building of the museum, called gungjip, or palace house, is made with wood that was assembled from Changgyeong Palace. When the Korean government renovated the palace, Chyung’s father-in-law bought the wood and kept it. The giwa, or roof, engraved with dragons, indicates that the building was used by royals. For this reason, important guests are entertained in this room when they visit the museum. This is where the French and Korean delegations had lunch last month.

President Park Geun-hye dined in this room with Chinese president Xi Jinping and first lady Peng Liyuan in July 2014. The guests were served at seats from which they can get the best view of the outside garden and Mount Namsan.

Visits of foreign delegations to the museum are mentioned in news reports aired or printed back home. That attracts other travelers from the same countries. After Xi’s visit to the museum, more Chinese travelers make sure they include the museum on their itineraries in Korea. The museum’s daily tour was fully booked for about two months after Xi’s visit thanks to interest from Chinese.

The museum, although not big, has enough things to view to hold the attention of visitors for about one hour. “One step, one view” is the idea that museum promotes based on the old Korean saying. It says that because of the structure of hanok, you never know what you will see as you turn a corner.

“You can only see what’s next when you continue walking around the venue and never really get to see the entire view of the house when you step in the main gate in traditional Korean homes,” said Park.

“So here, we also arranged 10 hanok in that way, so that visitors can enjoy different views as they proceed.” Victoria Beckham held a show at the museum. [JOONGANG ILBO]

To best use the venue to introduce Korean culture, the museum also provides stories or legends that can help visitors remember their visits. One of the most popular spots at the museum is a stone-made gate located in the middle of the grounds. Titled Bullomun, the museum calls it a “never aging” gate or a gate of eternal life. That means that visitors will get at least 10 years younger as they walk through the gate.

“No delegation has ever not enjoyed walking through this gate,” recalled Park, who has given many tours to delegations for almost a decade.

Another item that attracts attention is part of the furniture tour within the museum. The Odong tree, or Paulownia tree, grows quite tall in the span of about 15 years. It was used to make furniture when a girl in the family was getting married. Since many families planted such trees when they had a daughter, it was nicknamed the “marriage tree.”

In the museum, the hanok are filled with furniture collected over time by director Chyung. Some of the furniture came with the hanok. Other pieces were chosen by Chyung to match the looks and sizes of each building. During a guided tour, visitors get a chance to actually sit on the floor or in seating areas to understand why certain windows are placed in particular spots or why the furniture is so short in height. In the two-story building used for exhibitions, visitors can see the different features of furniture made from different types of trees.

Such varied elements in the museum impress visitors concerned with style. Fashion icon Victoria Beckham, former member of the pop group Spice Girls and wife of retired footballer David Beckham, had a show in Seoul last month to celebrate the release of her exclusive designs for Asian customers. She held the presentation at the museum.

Italian luxury brands Gucci also mounted an exhibition at the museum in 2012 and displayed its iconic bags with the furniture, highlighting the harmony of craftsmanship beyond time and space.

“Many fashion houses choose to do their events at our venue to show they are not only trying to get attention from the current generation, but also putting a lot of effort to show how their products match the cultural roots of Korea,” said Park.

The museum currently only offers guided tours. It plans to resume its afternoon tea service as early as later this month for those who want to spend more time at the venue.

To reserve a tour of the Korea Furniture Museum, go to www.kofum.com. Guided tours are offered in Korean, English and Japanese daily. The tour lasts an hour and the fee is 20,000 won. The museum is closed every Sunday, New Year’s Day, Lunar New Year holidays and Chuseok holidays. To get more information, call (02) 745-0181.