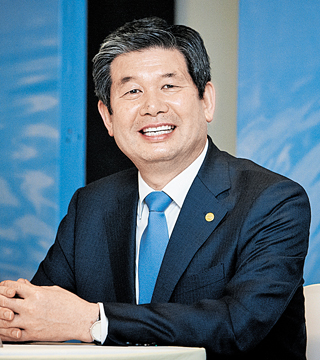 Choi Gye-woon, CEO of K-water since 2013, was elected president of the Asia Water Council during its first General Assembly held in Bali, Indonesia, from March 24 - 26.

At the 1st General Assembly of the Asia Water Council (AWC) held in Bali, Indonesia last month, Choi Gye-woon, CEO of the Korea Water Resources Corporation (K-water), was elected president. Set to lead the organization for three years, the K-water chief was elected in recognition of his previous efforts to solve water-related problems in Asia.

K-water launched the AWC in April 2015 at the 7th World Water Forum in Daegu to foster regional cooperation on water issues and meet water-related Sustainable Development Goals (SDGs) by the United Nations.

During the forum, K-water introduced its Smart Water Management Initiative (SWMI), a system that integrates information and communication technology (ICT) into the water management process to maximize water resource efficiency.

Of the AWC’s 26 executive bodies, six are South Korean, including K-water, Korea International Cooperation Agency and Daegu Metropolitan City. Having produced both the president and six executive members of the AWC, the nation is expected to take a leading role in solving future water crises in Asia.

The AWC claims that special committees and projects are features that set it apart from existing water-related international organizations. The council’s seven special committees hold meetings where water experts worldwide gather to discuss SDGs in Asia and practical solutions for water scarcity. So far, committees such as Water-aid, Water Education, Standardization and Knowledge Base & Dissemination have embarked on seven projects in East Asia. 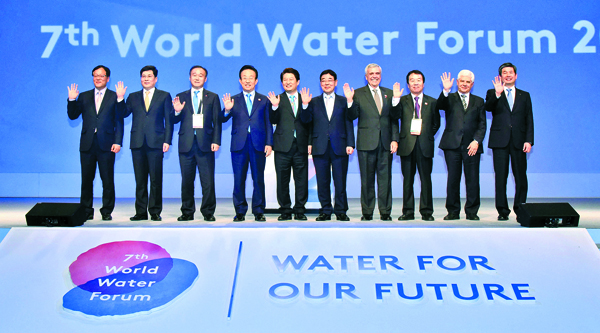 In drought-stricken Thailand, AWC and K-water have agreed to help devise a master plan for water resources development in the Chao Phraya River basin. In Bulgan, Mongolia, where desertification has caused a water shortage, it plans to install wells and water tanks to provide locals with drinking water. K-water anticipates that its involvement in these projects will put South Korea ahead of its competitors in global water management.

During the General Assembly, K-water held bilateral talks with representatives from UNESCO and the Asian Development Bank (ADB) on overseas business opportunities. The previous month, the corporation had signed a memorandum of understanding (MOU) with the ADB to introduce its smart water management technologies to four South Asian countries: Bangladesh, India, Nepal and Sri Lanka. Under the MOU, it will perform water supply facility inspections and provide training programs in one country per year until 2019.

K-water also signed an agreement with the China Institute of Water Resources and Hydropower Research, broadening the scope of the AWC’s activity and boosting exports of South Korea’s smart water management technologies.

K-water’s use of the council as a platform for global marketing comes amid concerns about a slowdown in the industry following the saturation of the domestic water market. Overseas expansion is a lucrative prospect, with United Kingdom-based research firm Global Water Intelligence forecasting that the world water market will grow by an average of 4.2 percent per year until 2018. At the current rate, it is on course to reach 1,000 trillion won ($868 trillion) in scale by 2025.

“We will place AWC at the center of Asia’s water governance, solve the region’s water-related problems and raise South Korea’s standing in the global water market through cooperation with Asian countries and international organizations,” said Choi in his acceptance speech for presidency.