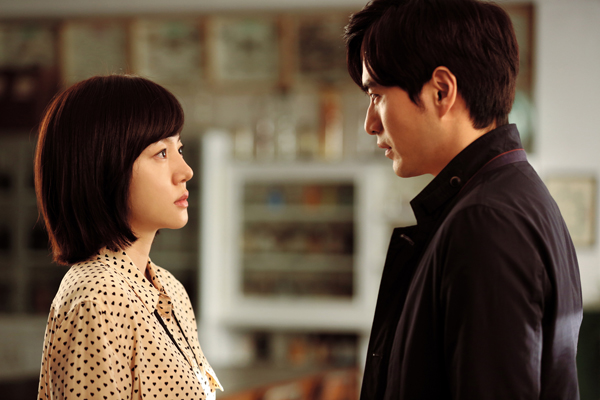 One of roles Lim Soo-jung, left, plays in “Time Renegades” is So-eun, who is the love interest of a detective named Ji-hwan (Lee Jin-wook). [CJ ENTERTAINMENT]

“Fantasies of everlasting love plus the concept of time travel captivate people’s minds in a weird a way.”

So actress Lim Soo-jung explained her reason behind selecting the film “Time Renegades,” which opens nationwide on Tuesday.

It was directed by Kwak Jae-yong of “My Sassy Girl” (2001) and “The Classic” (2003), both of which deal with the concept of romance and its relationship to time.

Kwak, who has mostly worked in China for the past few years, has returned to Korea with this ambitious quasi-romance, quasi-thriller flick, which features a high school teacher named Ji-hwan (Cho Jung-seok) from 1983 and a detective named Gun-woo (Lee Jin-wook) in 2015, interacting with each other through dreams to prevent a notorious murder case.

At the center of the murder case stand two women: Yoon-jung and So-eun, both of whom are played by Lim.

So-eun, who is living in contemporary times, is a reincarnated version of Yoon-jung from 1983. Despite the 32-year gap, the events of So-eun’s life tend to repeat those of Yoon-jung, who was murdered by an unknown serial killer in the ’80s. But the two men collaborate to change the fate of So-eun.

“Playing a double role is actually a big chance as an actress,” the 36-year-old Lim said.

“You get to show versatile aspects of yourself, especially in this film, because you play two characters that come from different time periods. Not only that but to be in the center of a case that leads the whole plot of the film is something that many actresses would consider tempting,” she added.

Looking back through her acting career, Lim certainly did not stick to playing the same type of character.

She started off her career playing an innocent girl in the horror flick “A Tale of Two Sisters” (2003), and later played an anorexia patient who believes she is a cyborg in “I’m a Cyborg, But That’s OK” (2006) and an intimidating wife in the romantic comedy “All About My Wife” (2012).

But there were times when the actress wasn’t able to pull off her character as much as she would have liked. For example, last year’s romance movie “Perfect Proposal,” which flopped at the box office, was rated her most unsuccessful film by critics.

“The movie’s disappointing run was devastating, but it did give me a chance to be introspective. I may perhaps have been complacent,” said the actress.

Lim is also known for being passionate.

Without a guaranteed contract, she took part in the small video project “El Fin Del Mundo,” which won an award at the 2012 Gwangju Beinnale. For the project, she focused on the effort and passion of the director instead of thinking about its success.

As an individual, Lim is serious and enthusiastic at the same time. From getting the hang of making coffee to playing guitar, she says she digs into things until she has mastered them. At the moment, she says she is intrigued to find a way to make the world a better place as an actress. Her wish may sound a bit unusual, like her other wish of living to be 100. 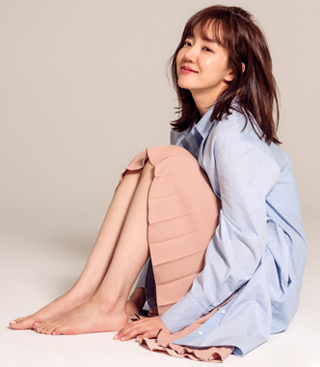 But after hearing where she is coming from during a recent interview with the JoongAng Ilbo, it doesn’t sound so far-fetched.

Q. Your debut feature was “The Romantic President” (2002), which Kwak wrote and directed. He confessed to have had his eye on you since then. Did you know?

A. Not before he only recently told me so. Of course, I was pleasantly surprised to hear it. I was delighted to get the screenplay from the director because I was fascinated by his previous movie, “The Classic.”

Kwak is known for his ability to bring the best in actresses, as has been shown with Jun Ji-hyun and Son Ye-jin in “My Sassy Girl” and “The Classic.” Do you think he did the same for you?

I mean he had the character all drawn out from what to do with her hair to what she would wear in given circumstances. He definitely deserves credit for making one of my two roles, Yoon-jung in 1983, so lovely not just in terms of appearance but in many ways. If you think about it, the tragedy Yoon-jung is to face is the impetus for the whole story of Ji-hwan and Gun-woo. So the incident should have been as tragic as it could be. I think he just pulled it off by setting Yoon-jung a teacher, a well-respected profession in the ’80s, and on the verge of getting married. The director kept calling for endless takes to build the image that he wanted her to have: someone you just can’t help but love.

How was filming the chase scene on the mountains of Gangwon under the artificial rain?

We had to pause because the water tank for the sprinkler truck once froze up. Running in bare feet was crazy to say the least. But I was shocked to see a snapshot of myself smiling during the break. The whole shoot progressed amid very encouraging and lively ambience. Staff, actors and the director were busy encouraging each other with pep talks and a lot of pats on the back. I was only too happy to be part of it.

How were your male counterparts?

Lee Jin-wook has a bit of an off-the-wall personality. Cho Jung-seok is a guy who seems to still have a 10-year-old in him, which I thought was cute. He just has happiness oozing out from him even when playing his role. In some tragic scenes where he is forced to show negative emotions, I witnessed him really being immersed into his assigned role.

If you could travel in time, which era would you visit?

Paris or New York in the 1960s was the era when artists, Andy Warhol being one of them, expanded the horizons of artistry. I do have some admiration for the hippie culture as well. If I had to pick an era in Korea I’d pick the 1930s. Despite the historical hardships, the cultural transitions happening then are extremely appealing. I would have either been the artist not vested in anything or participated in the independence movement. I think living in that era would have encouraged me to really roll up my sleeves and try to make a difference in the world.

How are you expressing that sense of duty to contribute to a world in 2016?

In the field I am in, whether it be at a movie shoot or in the movie industry itself, I should not fear to speak up and represent myself. The older I get the more solid that belief becomes. In my early 30s I used to basically discount myself and refrained from giving in my opinion. But with 15 years of acting experience under my belt, I don’t feel that way anymore.

I have 10-year old dog in my house. I would like to adopt abandoned dogs or cats. I am also interested in environmental preservation. When I was a teenager I admired Audrey Hepburn and her compassion for helping children in Africa. She used her fame to direct the world’s attention on to what was being overlooked. It is vague and uncertain, but I hope once I become someone who is more recognized in society I will be able to contribute to society in some way, shape or form.