Park’s hope for Rio gone as KSOC stands by rules

Park’s hope for Rio gone as KSOC stands by rules 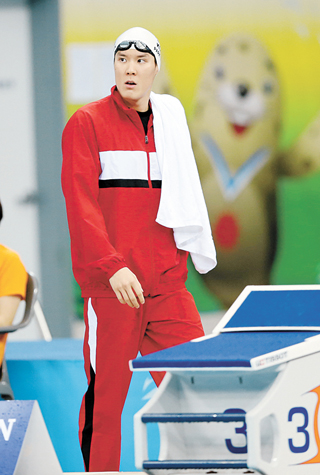 Korean Sport Olympic Committee has ruled on Tuesday that it will not revise its rule that blocks swimmer Park Tae-hwan from going to the Rio Olympics. [ILGAN SPORTS]

Park Tae-hwan, South Korea’s only Olympic medal winner, was Wednesday all but ruled out of competing in the Rio Olympics.

The Korean Sport Olympic Committee (KSOC) ruled that it would not waive its regulations that blocked the 26-year-old from joining the national team following his 18-month ban after testing positive in an out-of-competition doping test by the International Swimming Federation (FINA).

Park’s only chance of competing in Brazil would be if KSOC alters its own regulations and follows international standards which prevent an athlete from being penalized twice for a single offense, in this case by KSOC and FINA. As well, any possible KSOC U-turn would have to take place at its next meeting, which has not been scheduled yet.

On Wednesday, the KSOC’s Sports Fair Competition Commission ruled that it will not modify its regulation which bars athletes who have been suspended for any reason from joining the national team for a period of three years after their ban expires. However, the international regulations of International Olympics Committee (IOC) would allow Park to join the national team immediately after his suspension ended on March 2.

Due to the KSOC rule, which was implemented in July 2014, Park is barred from the national team roster until March 2019.

Some in the legal community believe Park is serving double punishment by the KSOC regulation. They say the ruling is similar to the “Osaka Rule” of the IOC that banned athletes from participating in the next Olympics even after their suspension ended. The “Osaka Rule” was eventually eliminated by the body in 2011 due to a ruling by the Court of Arbitration for Sport (CAS) that it is unfair to punish athletes twice for a single infraction.

According to a KSOC official, the body should not change its regulations and give special treatment to Park.

The KSOC decision effectively ends Park’s shot at another Olympics medal. Park has been training in Australia to take part in the national team qualifying meet slated from April 25 to 29 in the Donga swimming championship at Gwangju Nambu University International Aquatics Center.

“Park decided to accept the decision made by the national sports body,” stated an official from Park’s management company, Team GMP.

“Park has been getting ready for the national team qualifiers. His time has been solid during his training recently. But now that his chance at the Olympics is gone, everything seems to be up in the air. His immediate plan is also blurry. It is still undecided when he will return from Australia.”