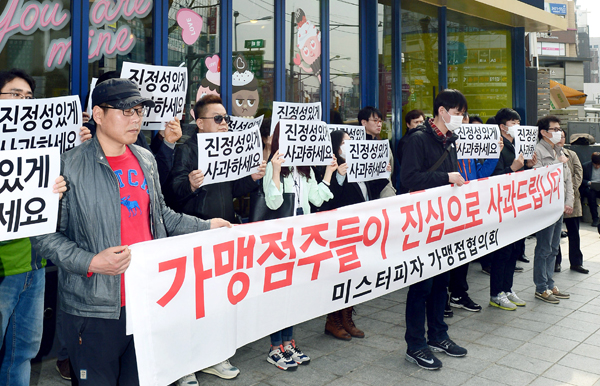 Owners of franchised stores on Wednesday demand an apology from Jung Woo-hyun, the founder and chairman of Mr. Pizza, for using violence against a security guard. [NEWSIS]

A few days ago, Jung Woo-hyun, CEO of MPK Group, which owns the pizza franchise Mr. Pizza, physically assaulted a security guard for pulling down the store’s shutter before Jung exited the building.

From the walnut cookie company chairman who assaulted a hotel employee for asking him to move his car, to the Korean Air vice president’s rage over nut service, the list of power abuses by owners and top executives goes on.

On the contrary, you may even develop a superiority complex to overcompensate the frustration of not becoming the ideal self by bragging and showing off.

Also, you will want to emphasize who you used to be or who you are friends with. If you feel not properly acknowledged, you may burst into a rage. The repeated incidents of the owners and CEOs’ power trip show how common superiority complex is today.

In 2010, a photo of Apple founder Steve Jobs and Google chairman Eric Schmidt having a conversation at a café in Palo Alto, California, became sensational in Korea. People thought that it was interesting to see the two CEOs, who were not particularly on good terms, drive their own cars and were sitting among other people.

But this is the norm in the United States. Warren Buffett, one of the wealthiest people in the world, personally drives his own 10-year-old car.

Google executives who are paid several hundred thousand dollars would attend parent conferences and volunteer at schools for their children. They may be the boss at the company, but they know very well that they are citizens with the same rights and responsibilities in the community. In such societies, no rich man is respected simply for his money.

Korean capitalism was built on compressed growth and the culture hasn’t matured. It is only natural because culture takes time to be established. But the impact of the power trips are too serious to be left uncontrolled. Their behavior fans anti-corporate sentiment and skepticism over capitalism. The atmosphere also discourages healthy businessmen. We need a temporary safety feature so these incidents don’t happen again.

An option to consider is “punitive compensation.” When a person with power and money incurs physical and psychological damages with malicious intent, they should be made to compensate a far greater amount than the actual damage. In fact, aside from the Korean Air heiress who made the airplane turn back over nut service, the owners and CEOs rarely get criminal punishment.

The amount of compensation through civil lawsuits is often negligible. The risk is too small to control their behavior.

How about applying the Fair Trade Act, which now only applies to business activities, to the owners? It does not have to be extreme. The U.S. Supreme Court suggests “several times and as much as 10 times” compensation.

The punitive compensation can serve as a mirror for CEOs who are unable to look at their true selves.