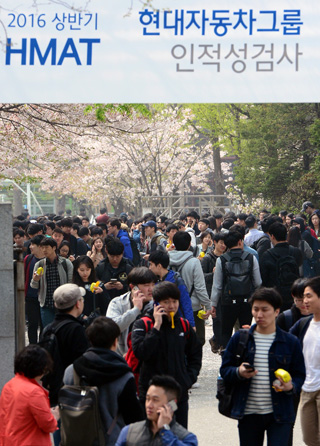 Applicants to the Hyundai Motor Group exit after taking the company’s aptitude test on Sunday in Seoul. [NEWSIS]

As many as 10,000 jobseekers in their 20s and 30s nationwide took the Hyundai Motor Group Aptitude Test, known as the HMAT, at high schools in major cities on Sunday, indicating just how many young Koreans are desperate to land a job at one of the nation’s largest conglomerates.

The stakes are high for the young and out of work, particularly at a time when the unemployment rate for people between the ages of 15 and 29 hit a record 12.5 percent in February.

April will be a stressful month for jobseekers. Starting with the HMAT, those looking for work will take similar aptitude tests at other large business groups like Samsung, LG and SK, which offer jobs with decent salaries and welfare benefits.

Samsung will conduct its Global Samsung Aptitude Test (GSAT) on April 17, while LG and CJ will hold their tests on April 16. Kumho Asiana will run it test on April 23, while AmorePacific’s is set for April 30.

Jamsin High School in Songpa District, southeastern Seoul, was crowded with a total of 1,047 applicants from early Sunday morning. Most were male, since the country’s largest automaker decided last year to restrict its twice-yearly public recruitment only to engineering majors.

“It is definitely not easy for engineering majors these days,” said a 27-year-old college student who came to take the test for the first time. “Until several years ago, getting a job wasn’t a problem for engineering student, but I saw more and more senior graduates failing to enter conglomerates.”

Even before 7:40 a.m., the applicants gathered in small groups in several corners of the schoolyard to hold last-minute review sessions using sample questions from previous tests.

Hyundai Motor Group, including all 13 of its subsidiaries, plans to hire about 3,000 people in the first half of this year, and another 7,000 in the latter half.

The test is five hours long and consists of seven areas including language comprehension, logic-based reasoning and an essay. Using electronic devices including smartphones and tablet PCs was strictly prohibited during the testing time.

“The spatial reasoning part is especially difficult for me because there’s not enough time,” said an applicant surnamed Kim who failed the HMAT last year.

In a scene reminiscent of the annual college entrance exam, the College Scholastic Ability Test, a man paced anxiously at the entrance to the school. He had forgotten his ID card at home, and was waiting for his mother to bring it to him.

All exam supervisors wore blue covers over their shoes to help reduce noise while walking during the examination hours. The supervisors were entry-level employees of the group who volunteered.

Applicants who pass the HMAT will move on to two interview sessions slated for late April through May. Positions will be announced in early June.