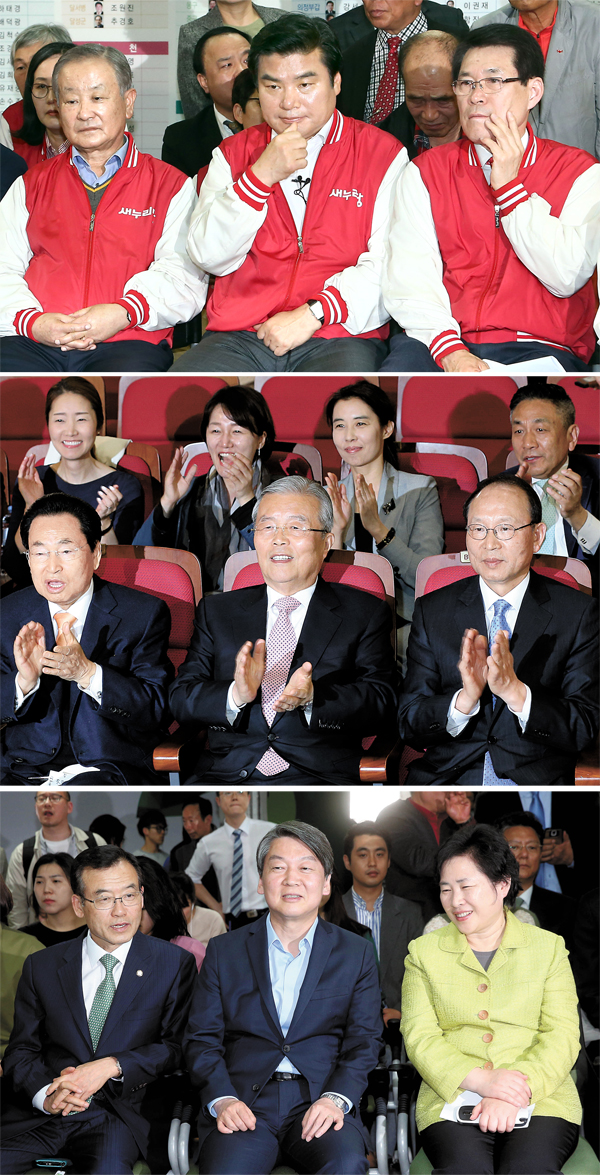 The Saenuri Party is expected to lose its majority in the National Assembly, as voters in the general election showed unexpectedly strong support for a third party — Ahn Cheol-soo’s People’s Party — altering Korea’s lengthy political tradition of a two-party system based on regionalism, class and ideology.

Voters nationwide cast ballots to elect the 20th National Assembly on Wednesday. Of the 300-member legislature, 253 will be lawmakers representing electoral districts and 47 will be proportional representatives named by political parties. Voting took place from 6 a.m. till 6 p.m., and turnout was 58 percent, the National Election Commission said.

According to the election watchdog, the Saenuri Party was leading in 112 out of 253 districts, when 24.6 percent of the ballots were counted as of 9:30 p.m. The Minjoo Party of Korea was leading in 93 districts, the People’s Party in 24 and the Justice Party in two. Independent candidates were leading in 12 constituencies.

At 9:30 p.m., 4.8 percent of the proportional representation ballots were counted. The Saenuri Party received enough votes for 20 proportional lawmakers, the Minjoo Party and People’s Party gained 12 each and the Justice Party three. All of those figures could change with further counting.

Based on the early returns, the Saenuri Party could win 132 seats, the Minjoo Party 105 and the People’s Party 36. The Justice Party could win five, while 12 independents might win. In 10 districts, ballot counting had not started by press time.

All three broadcasters received the same data from the joint exit poll, but they interpret the raw numbers differently. The projections are, therefore, different for each broadcaster.

The exit poll was conducted at 2,500 voting stations across the country by questioning 650,000 voters. Exit polls by broadcasters have been conducted since 1996, but they often failed to project accurate outcomes, especially when many races were tight, as they were in Wednesday’s election.

In addition, Wednesday’s exit poll did not include early voters from last Friday and Saturday, who account for 5.13 million votes, or 12.2 percent of registered voters. Their votes could significantly alter the results.

If the projections hold up, it will be the first time in 16 years that liberal opposition lawmakers will outnumber the ruling party in the legislature, and as a result, President Park Geun-hye will struggle through the remainder of her term, which ends in February 2018.

In contrast, Daegu reported the lowest turnout of the 17 metropolitan cities and provinces, with 54.8 percent. Busan recorded 55.5 percent.

“Voters of Daegu did not show up to vote, apparently because of their disappointment over President Park and the Saenuri Party’s nomination fracas,” said Prof. Go Seon-gyu of the Korean Civic Education Institute for Democracy under the National Election Commission. “As a result, the trend will put the Saenuri Party at a disadvantage in scoring proportional seats.”

In the 2012 election for the 19th National Assembly, turnout was 54.2 percent. At the time, the Saenuri Party secured 152 seats, the Democratic United Party (the predecessor of the Minjoo Party) won 127 seats. The Unified Progressive Party, now disbanded for its pro-North Korea affiliation, won 13, and the Liberty Forward Party, a Chungcheong-based conservative splinter party of the Saenuri Party, won five. Three seats were won by independents.

The next legislature will be divided among three major parties — the Saenuri Party, Minjoo Party and People’s Party — for the first time in 20 years. The 1996 general election was a contest among three political giants. Incumbent President Kim Young-sam’s New Korea Party, the Saenuri Party’s predecessor, won 121 seats in the 253-member legislature. The National Congress for New Politics of future President Kim Dae-jung won 66 seats, and the United Liberal Democrats of veteran politician Kim Jong-pil won 41.

After the exit poll projections were announced Wednesday, the Saenuri Party reacted with shock. The leadership watched broadcasts at their party headquarters in Yeouido, western Seoul, and could not hide their disappointment. Chairman Kim Moo-sung was conspicuously absent from headquarters because he was hospitalized for fatigue from the campaign.

“No matter what outcome it will be, we respect the people’s choice,” said Ahn Hyoung-hwan, a spokesman for the Saenuri Party’s campaign.

Throughout the campaign, the Saenuri Party repeatedly said its goal was winning 180 seats, a magic number that would allow contentious bills to be designated as fast-track deliberation items to skip complicated negotiation procedures. If the projections are true, the party won’t even have enough seats to call a vote.

The Minjoo Party was sanguine after the exit polls were announced. “As we see the exit polls, we can feel once again how sharp public sentiment is,” said Kim Chong-in, the interim chairman of the party and chief of its campaign.

It appeared that the political experiment of software tycoon-turned-lawmaker Ahn succeeded, and his People’s Party is expected to secure enough seats to form a negotiation bloc inside the National Assembly to become the third largest power in the legislature.