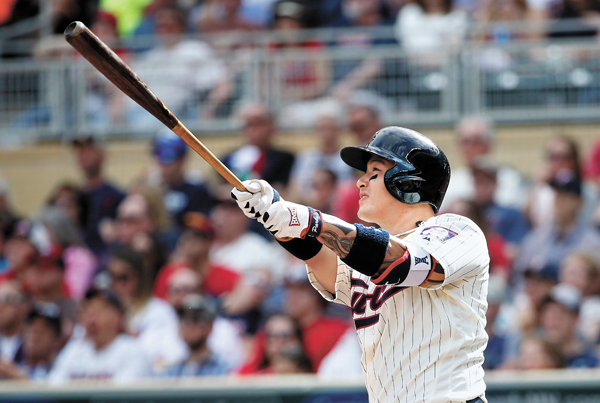 Korean slugger Park Byung-ho of Minnesota Twins watches as his solo homer flies to center field of Target Field. Park’s home run recorded 466 feet in true distance according to the ESPN Home Run Tracker, making it one of the farthest travelled homer at Target Field for the Twins in the franchise history. [AP/NEWSIS]

Coming six games after his first home run, the record-setting hit yet again proved his value to the Twins and manager Paul Molitor.

Park helped the Twins end its nine-game skid on Saturday, driving in the go-ahead run with a double while the team was tied with the Angels 4-4. The Twins overcame the Angels 5-4 after the hit in the eighth.

Coming out of his game winning hit the previous day, Park lifted the Twins yet again by blasting a towering homer off a 79-mile-per-hour slider by Angels reliever Joe Smith in the eighth inning with a 2-2 count. The blast to center was a solo homer, adding the final run-scored for the Twins to clinch its second consecutive win at 6-4. It also built in some insurance for the Twins as it prepares to take on the Milwaukee Brewers in a four-game series.

Flying 466 feet according to the ESPN Home Run Tracker, Park’s power hit yesterday falls within top five in distance at the Target Field, the home of the Twins. It is also the first homer with a true distance over 460 feet in five years at the stadium, since now retired Jim Thome powered 464 feet hit on July 18, 2011. Thome is one of the most celebrated MLB sluggers with 612 home runs in his 22-year MLB career. Park’s home run is also the second farthest travelled hit in the Major League as of yesterday after Colorado Rockies’ Nolan Arenado’s homer with 471 feet true distance. The homers by Park and Arenado are the only blasts this season going over 465 feet.

Park’s teammate Oswaldo Arcia also had a homer yesterday. The back-to-back home runs by Arcia and Park were the first the Twins had since August 2015.

“That was impressive,” said Molitor.

“I had good contact that led to the home run,” said Park. “Stopping the nine-game losing streak yesterday and back-to-back home runs today, we had a dance party in the locker room.”