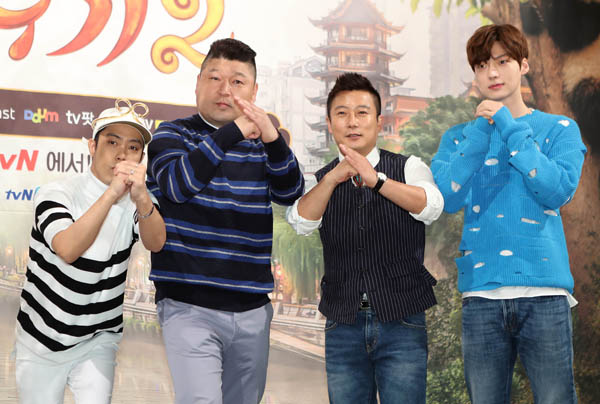 Na Young-seok’s web-based variety show “New Journey to the West” is returning with a second season, equipped with a new cast member, new destination and new system for airing episodes.

Under the subtitle “Unlimited,” the second season of the show will take the audience to the heart of Chengdu, the capital city of China’s Sichuan province, best known for spicy cuisine.

But above all, the biggest difference will be a change of cast members, with Lee Seung-gi having left to join the Army and model-turned-actor Ahn Jae-hyun joining the team.

Since the original four cast members - Kang Ho-dong, Lee Soo-geun, Eun Ji-won and Lee Seung-gi - had been appearing on TV together since Na’s previous show, “Two Days, One Night” (2007-12), the updated cast will certainly be refreshing and at the same time a bold move for both the producer and stars.

“I thought finding someone who can replace Seung-gi, who had been working with us for almost 10 years, was impossible,” producer Na said at a recent press conference in Seoul.

“Then I thought of Ahn Jae-hyun, whom Seung-gi had mentioned in the past as a nice candidate for a reality show. I thought his face was very fresh, as he hadn’t appeared on many variety shows before. I took a risk for sure, but he had the right mind to travel with us. I cast him expecting something totally different from Seung-gi.”

Ahn is one of the hottest up-and-coming actors at the moment, best known for his sidekick role in the megahit drama “My Love From the Star” (2013-14).

The 29-year-old recently made headlines with a surprise marriage announcement with actress and co-star Ku Hye-sun.

“I didn’t think I could fill Seung-gi’s vacancy, so I constantly thought about what I could demonstrate on the show,” Ahn said. “I was so stressed that I lost 1 kilogram [2 pounds] before taking off on the journey and another 3 kilograms while filming.

“But, other colleagues kept encouraging me, saying that the character of me and Seung-gi are completely different, so I should not feel pressured,” he added.

Another difference comes from the distribution system, where the first season relied solely on the Internet platform, while the upcoming season will air on TV networks as well. The producers explained that using both platforms is meant to cater to older viewers who cannot easily access Internet channels.

“The web version will focus more on separate episodes and include subculture such as slang,” Na explained. “On the other hand, the TV version, which targets those in their 40s and 50s, will be more about storytelling.”

However, the producer also admitted that broadcasting the show solely through the Internet caused financial problems, as it wasn’t able to generate enough profit.

Na compared web-based variety shows to electric vehicles. “It is the path we eventually have to take in the future, but using that as the sole medium for transportation requires a lot of resources that we don’t have enough of yet. So in the meantime, we are using both mediums and also something in the middle which can be compared to a hybrid car.”

Episodes of “New Journey to the West 2 ? Unlimited” will be uploaded on Internet platforms including tving, Naver TV Cast and Kakao TV on Tuesdays at 10 a.m. for eight weeks, starting today. The TV version will air on Fridays at 9:45 p.m. starting this week on cable channel tvN.

The first season of the show garnered an accumulated 50 million views on domestic portals.