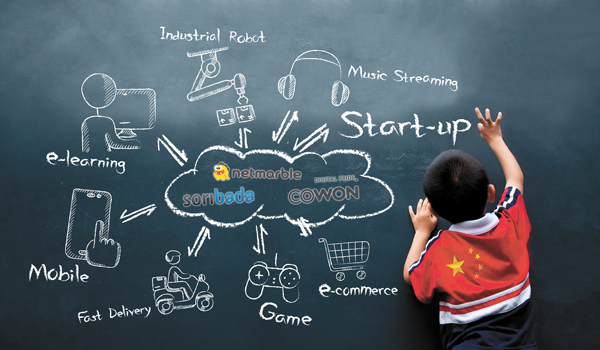 Korea’s tech industry was abuzz when TriBeluga, a new Chinese start-up accelerator, announced plans to set up a branch in the heart of Gangnam District in October 2014.

The office would be the company’s only overseas operation other than in Hong Kong.

Although global IT companies such as Google had already been opening start-up campuses in Korea, drawn by the country’s advanced IT infrastructure and leading technologies, this was one of the first big indicators that Chinese companies wanted in on the action.

China has long been interested in Korean game companies, and Chinese firms have invested big in the companies over the last decade as they have made some of the most successful online and mobile games, such as Lineage.

But these days, the interests of Chinese investors are diversifying.

Chinese companies are pouring money into every possible innovative Korean technology, in sectors as diverse as food delivery and online learning.

Corporate giants such as Tencent have gotten the most attention, but the latest trend involves reputed Chinese private equity and venture capital firms that handle billions of dollars, and perhaps signals more massive deals in the coming days.

Investment companies with their eyes on Korea include Hillhouse Capital, DT Capital and Legend Capital, and they all manage over $500 million.

With over $20 billion under its management as of January 2016, Hillhouse is one of the largest investment companies in Asia and is known for being selective in the companies it invests in.

“Hillhouse is a globally known investment firm with a good reputation,” said Lim Jung-wook, managing director at Startup Alliance Korea, a nonprofit that connects local start-ups with other organizations.

As the Chinese firm is a partner of institutional clients such as university endowments, foundations, sovereign wealth funds and pensions, Hillhouse handles a constant stream of huge capital.

“The fact that Korean tech companies are landing such deals at large famous private equity firms means that they can be recognized on the global stage,” Lim said.

DT Capital, a Shanghai-based private equity firm, invested 3.5 billion won ($3.1 million) in SmartStudy, an e-learning start-up in January, followed by a round of funding for Be2Link, a beauty start-up.

DT Capital currently manages multiple funds with over $500 million and 2.5 billion yuan ($385.7 million) in capital under management, according to the firm’s website. One of its strengths appears to be its close connections with eight local governments across China.

Korea’s venture-related investment reached an all-time high of 2.08 trillion won in 2015, a 27.2 percent surge from just under 1.64 trillion won a year earlier, according to data from the Small and Medium Business Administration.

Despite the diversification, some of the biggest deals are still coming from Korea’s game industry because of its high revenue steam compared to other online-to-offline service operators.

As of 2015, Korea’s top three game companies - Netmarble, 4:33 and Pati Games - were all backed in large part by Chinese tech giant Tencent after several years of big deals.

Tencent’s investment in Netmarble was particularly massive, and set an industry milestone in its size.

The Shenzhen-based company acquired a 28 percent stake in a deal worth $500 million to become the third-largest shareholder at the game developer two years ago.

Tencent said that the decision was aimed at distributing a wide range of Netmarble’s games, such as Marvel Future Fight and Raven, in China and potentially other countries.

NHN Entertainment, an entertainment arm of Korea’s top portal site Naver, announced on March 8 that it would sell 19.24 percent of its online game company, Webzen, to Fun Game, a special-purpose company established by Chinese game giant Ourpalm, for around 200 billion won. That would make Fun Game the second-largest shareholder of Webzen, the seventh-largest Korean game developer by revenue as of 2015.

Other sectors of particular interest for Chinese companies include music streaming, semiconductors and mobile messengers.

Tencent is the second-largest shareholder in Kakao, the operator of popular messenger app KakaoTalk and web portal Daum, at 9.33 percent.

Along with the investment, the two players also formed a business partnership, allowing them to pursue opportunities like making Daum Webtoon titles available on Tencent’s QQ.com portal.

Another area of interest is semiconductors, with Chinese companies eager to acquire key technology.

No major chipmaker has been snapped up by a Chinese company, but they have purchased smaller producers like Jeju Semiconductor.

While some experts worry that all the investment will lead to Chinese companies stealing Korean technology, others are less concerned.

“We need to keep in mind that China is already getting ahead of Korea in many sectors - except for businesses like semiconductors,” Lim said. “Since Korea doesn’t have enough companies to finance burgeoning start-ups, Chinese players are necessary for the industry to grow.”