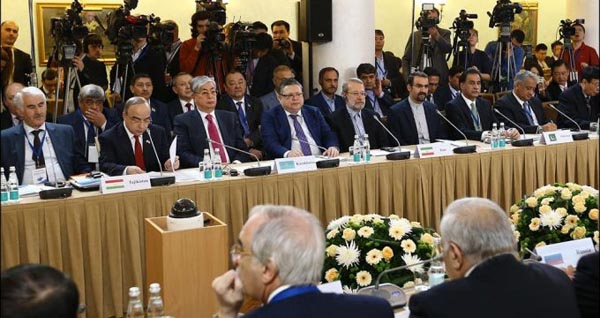 The first meeting of Eurasian parliament was held in Moscow on April 19.

On April 19, downtown Moscow had motorcades of diplomats escorted by police all day. Nineteen parliamentary speakers from 19 Eurasian countries gathered for the historic Eurasia parliamentary summit.

The first Eurasian parliamentary summit was attended by speakers from 19 countries, including co-hosts Korea and Russia as well as China, Iran, Indonesia, Vietnam, Kazakhstan, Azerbaijan, the Philippines, Mongolia, and India, an observer.

Iran, which has recently rejoined the international community, was eager to emphasize its position in Eurasian cooperation. The Indian speaker could not attend due to a delayed decision, and instead participated as an observer. India stressed that it would not fall behind in the changes and cooperation in Eurasia.

The meeting was a historic one in many ways.

First of all, it is significant that Korea took an initiative to assemble parliamentary leaders of major Eurasian countries. As the biggest continent on Earth, Eurasia’s importance in global politics, economics and culture is ever-growing. Major countries have made strategic approaches and diplomatic initiatives. But there had not been a multilateral consultative body encompassing Eurasia.

Existing groups like the Shanghai Cooperation Organization (SCO) and the Commonwealth of Independent States (CIS) have been led by China and Russia. There has never been a multilateral group initiated by Korea, participated in by many Asian countries and open to Europe. The meeting is creative and innovative.
Also, participating nations are very active. In the first meeting, they agreed to accelerate their development and make the Eurasian parliamentary summit a regular meeting. In the process, the original idea of biannual meeting was changed to annual meetings. Many speakers offered to host the next meeting.

It is meaningful that the Eurasian parliamentary summit is not a specific diplomatic group representing their executive bodies, but a sustainable apparatus. It is very important to facilitate legislative cooperation to accelerate and expand Eurasian cooperation, and the parliamentary leaders are positive and proactive toward the need. In addition to the major media of the participating 19 countries, non-Eurasian countries sent their embassy staff and other specialists to stay informed of the progress of the meeting.
China’s “One Belt, One Road” project, Russia’s New East Asian policy and Korea’s Eurasian Initiative are all about Eurasia. Japan, India and others also have other Eurasian policies of their own. China wants to use the Silk Road economic belt to break through the domestic economic slowdown.

At this juncture, Korea displayed diplomatic creativity and soft power by successfully initiating a parliamentary summit. Korea played a leading role in organization, operation and agenda setting, highlighting the presence as a developed capitalist and democratic nation. The Korean National Assembly staff set an example with meticulous coordination, planning, manners and diligence.

Another point is the expansion of the scope of Eurasian cooperation. Co-hosts Korea and Russia invited some of Asean members — Vietnam, Thailand, the Philippines, Cambodia and Indonesia. While some of them are maritime countries away from the Eurasian continent, the meeting nevertheless set a new concept that these Asean countries are included in Eurasian cooperation.

It is also a response to China’s expansive Eurasian strategy to include both overland and maritime Silk Roads to expand its influence and hegemony. Also, in the process of Eurasian cooperation, global standards and core democratic values are emphasized.

Each country’s Eurasian strategy is moving on to a new stage of cooperation and competition. Iran, which had fallen behind in Eurasian cooperation, is actively participating by asserting a need for immediate establishment of a permanent secretariat. The cooperation and competition will be more aggressive and visible in the second meeting in Seoul in 2017. At the same time, the rivalry of soft power will intensify as well.


*The author, a former editorial writer of the JoongAng Ilbo, is a visiting professor at Hankuk University of Foreign Studies.