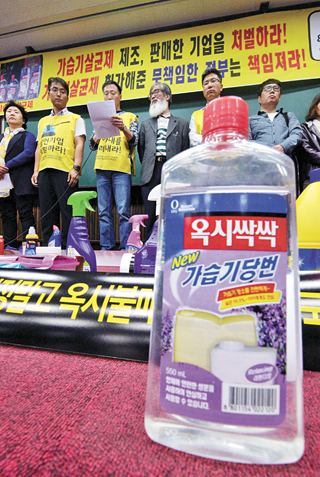 Members of the Asian Citizen’s Center for Environment and Health, a civic group, blame the government on Sunday for not acting fast in the sterilizer scandal during a press conference in central Seoul. [NEWSIS]

The British headquarters of Reckitt Benckiser Korea, manufacturer of the popular Oxy line of cleaning products, was well aware of the health issues surrounding its humidifier sterilizers and helped the local unit do crisis control, an exclusive report by the JoongAng Ilbo revealed.

In recent years, humidifier sterilizers by Oxy and other companies were linked to deaths and health problems of hundreds of users in Korea.

After confiscating computers from Reckitt Benckiser Korea’s offices in Seoul, prosecutors said last Friday that “various” clues showed that the headquarters was trying to cover up matters that would jeopardize the company and ordered employees in Korea to erase product reviews complaining of side effects uploaded onto their website, according to the JoongAng Ilbo.

In 2014, the company again changed its name to Reckitt Benckiser Korea, which critics saw as an attempt to distance itself from the sterilizer scandal. By 2015, more than 100 people who used the company's sterilizer died, according to the Asian Citizen’s Center for Environment and Health, a civic group.

While an insider from the Seoul prosecution suggested the possibility of Korea seeking judicial assistance from the U.K., the source did not specify exactly when or how. He said details will follow after prosecutors summon Shin Hyun-woo, 68, former CEO of Reckitt Benckiser Korea, for questioning later this week, the JoongAng Ilbo added.

Victims have sued nearly 30 former and current executives of the local company so far, around half of whom are reportedly foreigners.

Many key suspects, including Shin, will be summoned this week.

The company issued a formal apology last Thursday, breaking a five-year silence, and declared it was “deeply sorry” for inflicting harm on the victims. But the statement did not acknowledge any technical wrongdoing, saying it “worked hard” to find solutions to the rising complaints.

It was revealed Sunday that the company had recently submitted a 77-page report to the prosecution to defend its actions, asserting that some victims might have suffered from lung injuries because of yellow dust.

The report pointed out that previous government reports failed to recognize various other risk factors in the consumers’ health problems.

The Asian Citizen’s Center for Environment and Health on Sunday held a press conference in Jongno District, central Seoul and argued that the government was also responsible for not clamping down on the company.