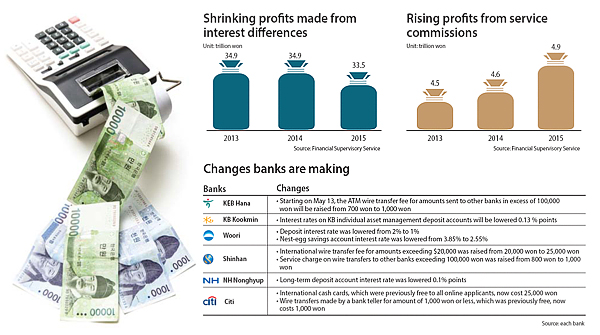 Financial institutions are raising ATM charges and other service fees as the central bank continues to keep the interest rate low and speculation mounts that additional rate cuts will follow.

KEB Hana Bank announced last week that it will be raising its commission service charges on ATMs next month. Starting on May 13, the bank will be charging 1,000 won (87 cents) when transferring amounts in excess of 100,000 won to other banks. The current charge is 700 won.

“We only get 1-percent interest when we deposit our money at the bank for a year,” said a 39-year-old office worker named Lee Duk-gyu. “So charging almost 1 percent on ATM services is excessive.”

Citibank and Shinhan Bank have been cutting back on several service benefits, as well as raising their commission rates. Citibank stopped offering free services in November when wiring an amount of less than 100,000 won to other banks through its bank tellers. Like other banks, it started charging 1,000 won for the service. Additionally, the international free cash cards that the banks were giving online applicants now cost 25,000 won.

Among the four major Korean banks, Shinhan is the most active in raising its service charges. Its ATM wire transfer fee between banks for amounts more than 100,000 won went up in February from 800 won to 1,000 won, while the cost of wiring less than 1 million won through a teller went up from 1,000 won to 2,000 won. Customers also now have to pay 25,000 won for international wire transfers of more than $20,000, up from 20,000 won.

Other financial products that were launched based on government policies have also seen their interest rates lowered. The government encouraged financial companies to create nest-egg savings accounts with several benefits, including exemptions on income taxes to help middle and lower-income households save more. The interest on these accounts was fixed for the first three years, and after the fourth year it switched to a floating rate. NH Nonghyup lowered the annual interest rate from 4.3 percent to 2.09 percent, while Woori lowered it from 3.85 percent to 2.55 percent. The banks have been reducing the benefits while raising the charges on services largely because the earnings made from the interest difference between loans and deposits has been shrinking as a result of the central bank’s loose monetary policy, which is intended to raise economic growth to 3 percent.

According to the Financial Supervisory Service, earnings made from such interests have shrunk to a balance of 33.5 trillion won, a decrease of 1.4 trillion won, or 4 percent, compared to the previous year. As a result, the net interest margin, which is the indicator of the banking industry’s profit, dropped from 1.79 percent in 2014 to 1.58 percent, a record low. Earnings made from service commissions have grown from 4.6 trillion won in 2014 to 4.9 trillion won last year, a 6.5 percent year-on-year increase.

“Banks need to diversify their profit structure [which was centered mostly on interest difference],” said Koo Ja-hyun, a researcher at Korea Development Institute. “[But] banks also have to make efforts to improve their services.”