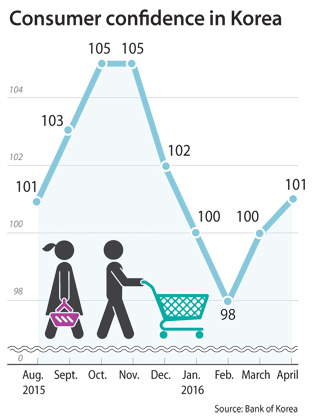 Even though the Korean economy grew at 0.4 percent in the first three months of the year - lower than the market forecast of 0.5 to 0.6 percent - the composite consumer sentiment index (CCSI) rose 1 point from the previous month to 101, according to Bank of Korea (BOK).

A reading above 100 points indicated that the majority of survey participants maintain a positive outlook on the national economy, while a reading below 100 indicates a negative view. The 100-point standard was set as the long-term average consumer confidence level between 2003 and 2015.

The CCSI fell for four consecutive months from 105 points last November to 98 in February.

The nation’s central bank cited the stabilizing Chinese financial market and lowered risks from Pyongyang for the improved consumer confidence.

“Consumers seemed to pin hopes on an economic recovery as the capital market indices rose and economic indices like retail sales showed stronger signs than the beginning of the year,” said Joo Sung-jae, head of statistics department at BOK. “In particular, big jumps in consumer sentiment regarding the current state of the domestic economy and future forecast brought up overall confidence.”

With such positive indices, Deputy Prime Minister and Finance Minister Yoo Il-ho was optimistic that the economy will do better through the second quarter.

“The Korean economy suffered from downward exports and facility investments in the first quarter, but it is recovering slowly,” Yoo told reporters after a meeting at the Gyeonggi Center for the Creative Economy and Innovation on Wednesday.

Economists, however, warned that the enhanced consumer confidence may be a short-lived seasonal phenomenon and the government should keep paying attention to help lift the economy.

“It’s early to conclude that the recovery sign has got stronger, because the consumer sentiment usually gets stronger in spring through March to May and weaker in January and February,” said Lee Joon-hyup, a senior researcher at Hyundai Research Institute’s department of macroeconomics. “The government should keep focusing on continuing the recovery through the summer months by August.”

Implementing a supplementary budget will help boost the economy through the latter half, Lee added.

However, Finance Minister Yoo maintained a conservative stance on a supplementary budget to cushion the impact of restructuring on the troubled shipping and shipbuilding industries.

“The government will come up with it [supplementary budget] if needed, but it will wait and see how the industry restructuring initiative influences the domestic economy,” Yoo said.