Palace library in Seoul reopens with a new purpose

Palace library in Seoul reopens with a new purpose 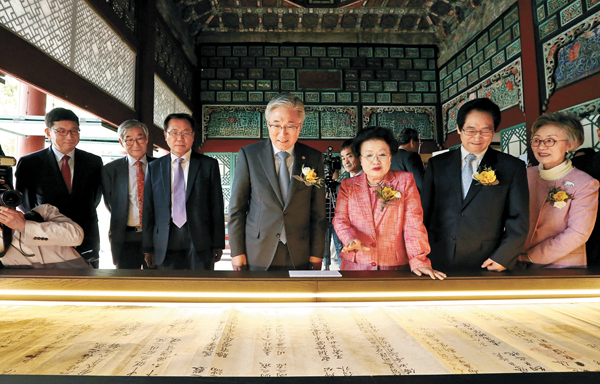 Culture Minister Kim Jong-deok, center, and Na Seon-hwa, chief of Cultural Heritage Administration, third from right, take a look at historical materials displayed at Jipokjae, a royal library inside Gyeongbok Palace that opened doors to the public as a small library full of books on the Joseon Dynasty (1392-1910), during the opening ceremony Wednesday. [MINISTRY OF CULTURE, SPORTS AND TOURISM]

Jipokjae, a royal library inside Gyeongbok Palace in central Seoul that was once used by King Gojong (1852-1919), finally opened its doors to the public on Wednesday after being turned into a special library full of books on the Joseon Dynasty (1392-1910).

The Ministry of Culture, Sports and Tourism, together with the Cultural Heritage Administration, decided to turn this royal library that has been closed off for decades into a small library for the public, saying that they have been somewhat too inclined toward preserving cultural heritage while neglecting the need of the public to witness history.

With newly installed bookshelves and stands, the library houses about 1,000 books on the Joseon Dynasty’s history, culture and its people as well as about 350 photo prints of royal materials.

According to the Culture Ministry, foreigners will also enjoy visiting Jipokjae, as it also houses about 230 Korean literary books that have been translated into English, Chinese and Japanese.

Jipokjae, which was constructed in 1891, was used not only as King Gojong’s study but also a reception room where he greeted foreign envoys. Each end of Jipokjae is connected to the pavilions Palujeong and Hyeopgildang. According to the Culture Ministry, after discussions with the Cultural Heritage Administration, it was decided to turn Palujeong Pavilion into a book cafe where visitors can rest and enjoy royal-style refreshments.

To celebrate the opening of the Jipokjae library, Minister of Culture Kim Jong-deok and Na Seon-hwa, chief of Cultural Heritage Administration, along with about 200 other officials and personnel, participated an opening ceremony held in front yard of Jipokjae on Wednesday afternoon.

Seol Min-seok, a star lecturer on Korean history, held a short speaking session in which he told a story about King Gojong and Gyeongbok Palace. This was followed by various traditional performances.

“The opened doors of Jipokjae marks the beginning of hands-on tours that allow visitors to experience the inside of historic spaces, going beyond what’s been limited to only enjoying the exteriors of cultural heritage so far,” said Kim Dae-hyun, an official from the Cultural Heritage Administration.

“We are hoping that Jipokjae Library will become one of the must-visit tourist attractions for both locals and foreign visitors to Korea and will make efforts to expand such experiences of our cultural heritage.”