Lee says he is ready for action

Lee says he is ready for action 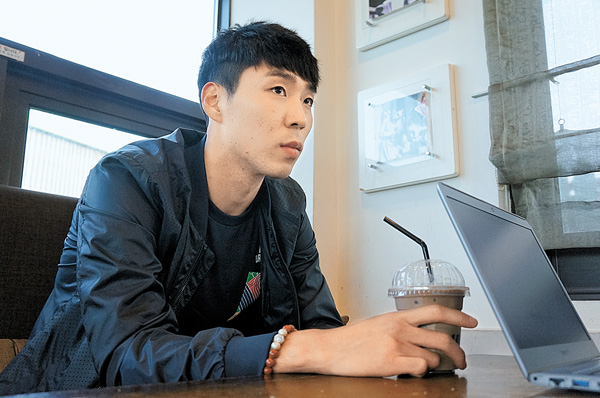 Ulsan Hyundai FC’s striker Lee Jeong-hyeop has been dubbed Uli Stielike’s “Prince.” After all, Stielike, the national football team’s manager, has in the past made remarks about Lee that betray his palpable confidence in the Korean striker. For instance, when critics claimed Lee was in a slump and blamed him for Ulsan’s poor showing in the K-League, Stielike defended Lee, saying that it would be difficult even for players like Messi and Ronaldo to net a goal given Ulsan’s current state.

General consensus therefore holds that Lee has secured his spot in the national team roster for the 2018 World Cup in Russia. And on March 24, in the second round of regional qualifiers for the World Cup, Lee proved Stielike’s trust is well-deserved by scoring the game winner during the final match against Lebanon.

But Lee is less confident about his World Cup chances. Ulsan, the former champions of the Asian Champions League, is anything but impressive this season, currently ranked eighth in the league. As the team’s ace striker, Lee has only scored one goal in the six games he’s played this season, leading critics to speculate that, were it not for Stielike, there would be no place for him on the national team roster.

Ilgan Sports, an affiliate of Korea JoongAng Daily, recently sat down with Lee to discuss his life as a footballer and his determination to silence his critics. 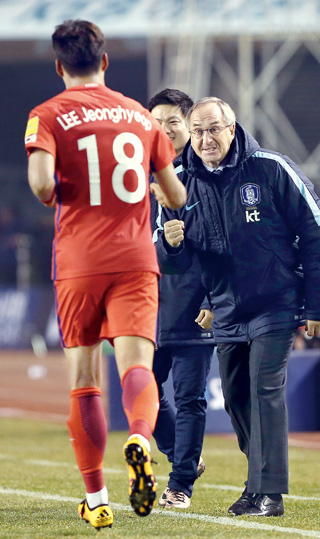 Q. It is widely known that Stielike is very fond of you. How do you feel about this?

A. I saw the manager’s interview, in which he said he wished me back in the national squad soon after my surgery for a facial fracture. I was touched by his kind words. I hope to repay him for what the manager has done for me.

The manager mentions you a lot. Why is that?

I don’t think that’s quite true. He talks a lot about everyone. He makes comments to motivate all the players, not just me.

Why do you think Stielike trusts you so much?

Honestly, I do not know. I thought the Asian Football Confederation (AFC) Asian Cup was going to be the last time I played for the national team. That thought drove me to go at every game like there was no tomorrow. I showed my tenacity and I tried to play as hard as I could. I think the manager was pleased with that. Also, Stielike trusts everyone on the national squad. I receive no special treatment.

How does Stielike normally address you?

He called me “soldier” when I was in Sangju Sangmu, serving my mandatory [military] service. After my discharge, he called me “retired soldier” for a while. Now he just calls me by my name.

You showed brilliance on the national team, but your performance hasn’t been so outstanding in the K-League. Can you explain why?

Some critics argue that you wouldn’t have made it on the national team roster if Stielike didn’t find you while you played for Sangju Sangmu FC. What do you think about this?

I understand where they are coming from and I agree. I need to listen attentively to such criticisms. Of course, it’s distressing to hear such a thing, but it’s the result of the lack of a decent performance on my part. I need to take such comments to heart and not let up.

Opponents for the final stage of regional qualifiers have been set. Any expectations before starting the final round?

Unlike the players who play in European leagues, my spot on the national team is not fixed. There are many strikers who can replace me. So I’m not thinking about the final round at the moment. I need to do my share for Ulsan before taking a shot at the national team roster. How Ulsan does in the K-League matters more for me at the moment.

Some say you will go to the Russian World Cup, just because of Stielike. Any thoughts?

The way I‘m playing right now, I wouldn’t be able to play in Russia. I cannot qualify for the national team when I cannot even excel in the K-League. I cannot be a disgrace to Stielike. I’m determined to net more goals and increase the level of my performance in the K-League before I play for the national team. I need the approval of everyone, including the fans, to pave my way to the World Cup. This is how I can repay Stielike for what he has done for me. At the moment, my goal is to show everyone my best effort against Spain and Czech Republic in June.

Is there anything you want to say to Stielike?

Stielike is the one who discovered me. I wouldn’t be where I am today were it not for him, and I wouldn’t have a chance on the national team. He had a good feeling about me and he stuck to his guns. Thanks to him, I was able to play in the national squad and receive support from the fans. I’m eternally grateful for that. Whenever I think about our manager, I can’t help but realize how lucky I am.