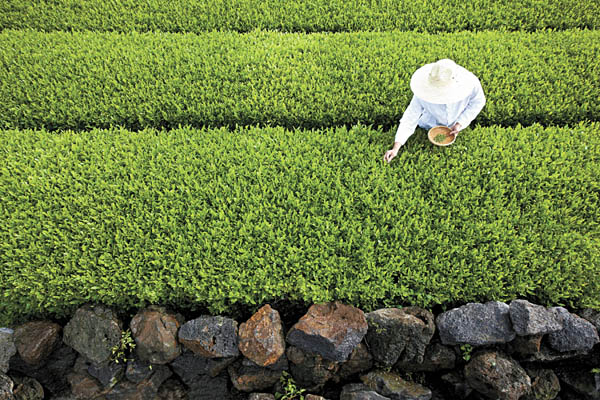 Young leaves are harvested at the Osulloc green tea garden on Jeju Island. Buds plucked during the spring’s first flush yield the lightest and freshest flavors, being the most tender part of the tea plant. [amorepacific]

AmorePacific’s ties to Jeju Island date back to 1979, when late founder Suh Sung-hwan set out to transform the island’s wastelands into fields of green.

The Jeju tea gardens have since joined the ranks of the Huangshan mountain range in China and Mount Fuji in Japan as one of the world’s three major green tea production sites.

Today, the 1,000 tons of organic green tea produced there every year are sold under Osulloc, the group’s tea brand. According to AmorePacific, the “O” stands for several things at once: “origin,” “only” and a whoop of joy. “Sulloc,” on the other hand, means “green tea produced at snowy Mount Halla.”

Despite its 47-year history, Osulloc has adapted to the changing times, adding modern touches to its long-standing traditions. Just like its custom blended teas, it is confident that the right mix of the past and present are what will keep it moving forward.

April 8 marks the first flush of the Osulloc green tea garden on Jeju Island. The first harvest is a meticulous process where buds are handpicked on only the clearest days of Cheongmyeong, the fifth division of the year.

Green tea is generally harvested three times a year. However, plants left to grow longer are higher in polyphenol, which enhances the leaves’ bitterness despite being responsible for many of the benefits of green tea. This means that the first flush in the spring is widely believed to yield the best-quality leaves — with higher prices to match.

The award-winning Sejac is a traditional blend of orok tea, made with lightly steamed and roasted young tea leaves, and pan-fired green tea. Roasted by tea masters using traditional artisanal methods, Oo-jeon is renowned for its mild flavor and sweet aftertaste. Illohyang derives its name from the pleasant aroma of a brazier brewing tea. Due to its main ingredient being young tea leaves, Osulloc can only produce a limited amount every year.

From May 5 to 8, Osulloc will hold the 10th Osulloc Tea Festival at its Seogwang Tea Garden in Jeju. Occupying an area of 528,928 square meters (131 acres), the green field spreads across the sloping landscape of the island. It is said that the garden’s location allows its plants to receive the perfect amount of sunlight to produce high-quality tea.

Since 2007, Osulloc has held its annual tea festival to celebrate Korea’s unique tea culture and invite visitors to unwind on slow-paced Jeju Island. This year, it will introduce various programs so that visitors can use all five senses to experience relaxation through tea.

The festival’s main events include “Create My Own Tea,” a program where visitors can experience the entire tea-making process, from handpicking buds in tea fields to roasting the harvested leaves.

An art event called “Tea Coloring” will allow visitors to get creative, providing them with a black-and-white outline of Jeju’s plantations to fill in with as many colors as they wish.

Finally, through the “Tea Diffusing Experience,” tea lovers can also try their hand at creating reed diffusers with aromas from their favorite blends.

Built in the shape of a giant tea cup, the Osulloc Tea Museum opened in September 2001 to provide visitors with a more in-depth look into Korea’s traditional tea culture.

One of its art galleries, called “Masters of Tea Vessels,” holds over 30 different interpretations of the tea cup by some of Korea’s most renowned ceramic masters.

The style of the cups ranges from sleek and sophisticated to rough and earthy.

The museum’s exhibition hall not only chronicles the history of tea but also holds a wealth of information on its production, properties and traditional uses. It also explores contemporary tea culture, merging the past with the present.

True to its name, “Tea Cups of the World” houses an extensive display of tea cups from over 100 countries. The collection is not only visually stunning but also represents cultural exchange between the East and the West.

After touring the museum’s many exhibitions, visitors can go up to the observatory on the second floor to see the vast expanse of green fields surrounding the museum.

At distinctive pavilion, heritage on display

In March 2013, Osulloc opened “Tea Stone,” a pavilion built to preserve and promote Korea’s tea-related traditions. At first glance, it looks like a box rising out of a hill. But closer inspection reveals that the structure is more intricate than it seems, with transparent walls that cantilever on one side and a shallow pool lining its edge.

A flight of stairs at the entrance of the building leads to a teahouse and an exhibit on Suh Sung-hwan, the late founder of AmorePacific. Its tinted glass walls allow visitors to enjoy a panoramic view of the surrounding forest while sipping Osulloc tea.

A tea sommelier is also on site to teach visitors how to select and properly drink tea. The expert offers 50-minute classes five times a day.

In a tour around the basement, visitors can witness the microbial fermentation of Osulloc’s “Samdayeon,” Korea’s first post-fermented tea. Samdayeon is stored in sealed containers made of cedar wood and left to mature for 100 days under strict humidity and temperature controls.

Visitors are welcome to drop by Tea Stone following a visit to the Osulloc Tea Museum, as the two buildings are close together.

Osulloc is constantly working on new ways to widen its customer base and stay ahead of its competitors.

To expand its green tea business, it has taken to setting up shops in luxury hotels such as Lotte Hotel Jeju and the Kensington Jeju.

Most recently, its Sejac tea was selected to be served at the Four Seasons Hotel in downtown Seoul, which opened last October.

The brand is also in the process of developing utensils to make tea just as easy to make with loose tea leaves as with tea bags.

Osulloc struck a compromise between the two when it started producing pyramid-shaped tea bags in 2007.

It has also worked to differentiate its products from those of other brands by investing in beautiful packaging. AmorePacific is confident that the colorful and geometric designs of Osulloc tea products have contributed to their popularity as gifts.

For customers who are new to tea drinking or are curious to try surprising flavors, Osulloc offers products such as “One Week Tea,” a gift set consisting of seven different blends of tea, one for each day of the week.

Serving the perfect blend of the traditional and modern one cup at a time, Osulloc teahouses have enriched the lives of tea-drinking novices and connoisseurs alike across the country.

The positive public reception has led AmorePacific to create more teahouses following its first in Myeong-dong.

Since its renewal last December, the Osulloc teahouse in the National Museum of Modern and Contemporary Art has focused on promoting tea not only as a beverage but also as a culture and way of life.

At its “tea bar,” the store provides consultative services, including a tea sommelier and samples of the brand’s best-selling blends. It also offers programs such as a “Mini Tea Class” and “Pure Tea Demonstration” in which customers are invited to participate.

There is a special set menu that can only be enjoyed at the Osulloc teahouse at the National Museum of Modern and Contemporary Art, consisting of loose tea leaves, special utensils for preparing the tea and dessert.

Customers can choose a flavor of their choice among Osulloc’s large selection and brew it themselves with the help of a guide.