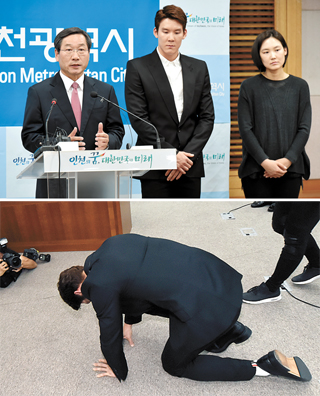 Top: Disgraced Korean national team swimmer Park Tae-hwan, middle, pleads for a chance to compete in the Rio Olympics, during a press conference held on Monday at Incheon City Hall. Park begged for a chance to “serve the country by swimming.” Incheon mayor Yoo Jeong-bok, left, was also present at the conference to make the case for Park. “It is only just for an athlete to pay the price for doping,” said Yoo. “But Park has already been punished by the International Swimming Federation (FINA).” Right: Park bows in front of the crowd at the press conference on Monday. Although the FINA suspension was lifted, Park has been banned from the national team by the Korean Sport Olympic Committee (KSOC). The decision by KSOC remains in place despite Park beating the top-level Olympic qualifying standards by FINA in the 100-meter, 200-meter, 400-meter and 1500-meter freestyle events during the 88th Dong-A Swimming Competition last week. [NEWSIS]