Online shopping grew sharply compared to a year ago, largely thanks to more consumers using their smartphones to purchase goods.

According to Statistics Korea on Monday, online shopping purchases made in March amounted to 5.19 trillion won ($4.6 billion), a 20.9 percent year-on-year increase. Mobile shopping alone constituted 50.6 percent growth, or 2.68 trillion won. This is the largest amount of purchases Korean consumers have made from their smartphones since 2013, when related data was first compiled.

Moreover, the figure shows that 51.6 percent of Korean shoppers today purchase goods with their smartphones rather than using their laptops.

As a result, online shopping in the first three months of this year amounted to 15.1 trillion won, a 21.8 percent year-on-year increase. Mobile shopping during the same period surged 52.2 percent to 7.76 trillion won.

Among the items purchased, cosmetic goods saw the biggest increase in March, which grew 41.7 percent year on year to 405.7 billion won, followed by food and beverages, which grew nearly 30 percent to 569.4 billion won. Electronic goods and telecommunications devices, including mobile phones, saw the third-sharpest year-on-year growth, jumping 23.3 percent to 543.3 billion won. On the contrary, software purchases made online fell 2.5 percent.

Purchases of children’s products, including those for infants and toddlers, via smartphones and other mobile devices have seen a significant increase in March of 66.4 percent to 172.4 billion won.

Shoes came in at a close second with 63.3 percent growth year on year to 61.5 billion won, followed by clothing and fashion items, after growing 60.8 percent to 346.2 billion won. 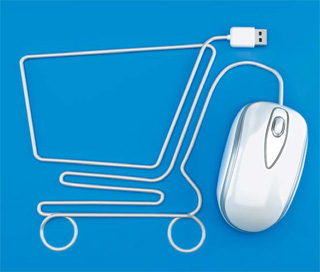 Additionally, for the first time, the purchase of goods that foreigners made from Korean online shopping sites has outnumbered that of Koreans using overseas online malls.

In the first quarter, foreigners bought 478.7 billion won worth of goods from Korean online shopping malls. This is an 84.5 percent surge compared to the first quarter of 2015, when foreigners bought 259.4 billion won worth of Korean goods. During the same period, Korean purchases of goods from foreign online sites increased 5.7 percent to 446.3 billion won. However, when compared to the last three months of last year, this figure fell 10.4 percent, indicating that Koreans are cutting back on their purchasing of goods from overseas shopping malls. An early study by the Korea Customs Service showed that fewer Koreans were logging on to purchase goods from overseas online shopping malls due to disappointing services, including incorrect deliveries and the inability to grant refunds.

The Chinese were the biggest buyers of Korean goods, buying 363.4 billion won worth of goods online, a 123.6 percent year-on-year surge. The Chinese account for 75.9 percent of foreigners who purchased Korean goods in the first three months of this year.

Americans were the second-largest group, after buying 34.2 billion won worth of products. The U.S. consumers accounted for 7.1 percent. However, this is a 13.5 percent decrease compared to a year ago.

Although Europe only accounted for 1.6 percent of the total foreigners purchasing Korean goods online, it saw the second biggest year-on-year growth - 75 percent to 7.7 billion won.

The most popular items among foreigners were Korean cosmetics, which sold 316.3 billion won in the first three months, followed by clothing and fashion-related goods, amounting to 83.9 billion won. Cosmetics alone accounted for 66.1 percent of the items that foreigners bought.

The biggest market for Koreans’ online purchases was from the United States, where they purchased 303.6 billion won worth of goods. The European Union was the second with 77.1 billion won, followed by China with 35.2 billion won.