It is no surprise anymore that you can carry 20 to 30 plastic cards in your smartphone and pay online or offline.

For the past year, more than 20 easy-payment services connected with physical cards or bank accounts were launched by IT firms, online retailers and financial institutions, as they rushed to the mobile payment market in order to compete with China’s Alipay and the United States’ PayPal. There are already three famous “Pay” services - Kakao Pay, run by the nation’s largest messenger operator; Naver Pay, operated by the nation’s unrivaled web portal company; and Samsung Pay, created by Samsung Electronics. Kakao Pay has around seven million users, while Naver Pay has around 4.5 million and Samsung Pay has about 2.5 million, based on monthly statistics.

But starting this year, something more than savings cards and account information will be available on smartphones, and the move is being led by promising Korean fintech start-ups. 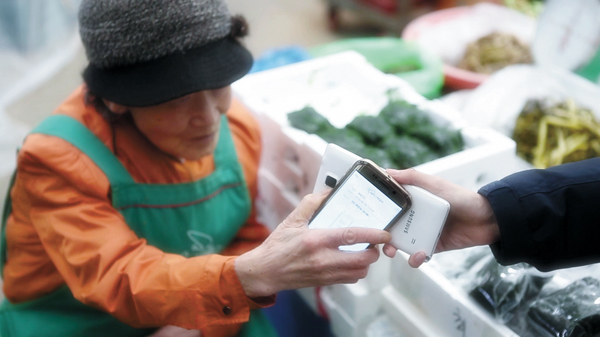 Phone-to-phone payment for small merchants at traditional markets is set to begin in cooperation with credit card companies in July. [HANKOOK NFC]

CEO Richard Hwang has developed a mobile point-of-sale (POS) application for NFC-enabled smartphones and collaborated with Samsung Pay, PayOn and Visa/Master Card to materialize so-called phone-to-phone payment. Phone-to-phone payment works like this: once a buyer presents Samsung Pay, the seller starts the mobile POS app, enters the payment amount, and touches or bumps the two phones. The company will test the service at a gas pump in Yeoksam-dong, southern Seoul, on May 10.

Hwang is eyeing Australia and Europe, where 100 percent and 35 percent of card users have contactless smart cards. Embedded-integrated circuits in contactless cards can store and sometimes process data and communicate with a terminal via radio waves. Hankook NFC also has a patent for NFC card-touch authentication. All you need to do is place a card on the back of an NFC-enabled smartphone and enter the first two digits of password. It took two years to get approval from the Financial Supervisory Service and credit card companies for the security of its authentication technology.

“In remote identity verification, a physical payment tool is a must,” Hwang said. “Saving any card information in smartphones can be dangerous.” 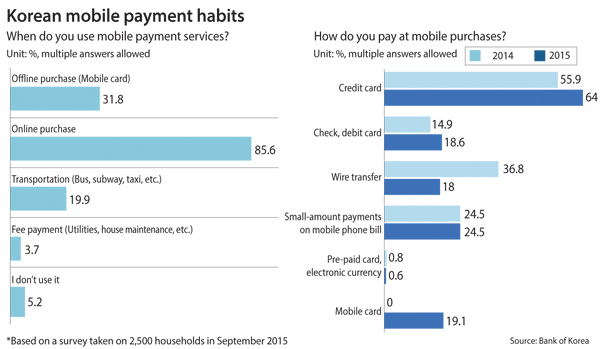 However, Hwang’s payment service currently works only on Android-powered smartphones in Korea. Since Apple doesn’t open its application interface, iPhones have no NFC feature here.

Paycock, another emerging start-up excelling in the mobile payment world, has a technology that processes payments by sending credit card companies the encrypted text of a consumer’s card number and expiration date, which is created by scanning the actual credit card without leaving the image data inside smartphones or tablet PCs.

“Our technology is not taking pictures and leaving them on smartphones,” Paycock CEO Kwon Hae-won said. “You may think you are taking a photo of your card, but what the Paycock application does is just take the engraved or protruding letters and numbers on the surface of your credit card.”

The Paycock system works both on Android and iOS phones.

“We commissioned a private security company called NSHC to hack into information taken by our system, but they said it’s impossible,” he said.

One leading commercial bank has clinched a deal with Paycock to adopt the technology within the month. The company is now in talks with a local retailer and several credit card companies.

“The major cause of the security issue is that the payment device keeps personal information,” Kwon said. “The strongest security stems from volatile information.”

To cater to people who still feel suspicious when it comes to phone-to-phone payment or who prefer physical card payment, some start-ups are extending their mobile services to the offline world.

Brilliants, a homegrown start-up, has developed a plastic card with a chip that can carry data of up to 30 digital cards, allowing a user to switch between them and make payments using any regular credit card reader. The card is designed to carry not only credit and debit cards, but also membership point cards and a corporate ID card. It is scheduled to launch by the first half of this year.

LG Electronics is working on launching its own payment service by collaborating with Shinhan and KB Kookmin Card to compete with Samsung Pay. The so-called LG Pay also involves a plastic card similar to the one developed by Brilliants.

Developers of mobile payment services are also further expanding into consumer-to-consumer payments, or remittances. Toss, an easy money-wiring service launched last June, has now grown into a popular mobile app among people in their 20s and 30s. Nearly 100 billion won ($88 million) was sent through the app in April alone, according to the app’s developer, Viva Republica. The service is available at 16 financial and nonfinancial institutions, including major commercial banks like KB Kookmin and KEB Hana, cooperatives and savings banks.

“With Toss, users can send small amounts of up to 300,000 won per transaction without remembering the recipients’ bank account numbers,” said Ahn Ji-young, a vice president at Viva Republica. “Once you install the app and sign up with your bank account information and mobile phone number, you can send money to anyone merely by using their phone number.”

Time is a key factor with regard to remittances. Wiring via Toss is considered to take the least amount of time when compared to competitors like Bank Wallet Kakao and YeloPay. Kakao’s app requires additional procedures like charging the electronic wallet before payment or money wiring. YeloPay works similarly as Toss, but it requires a self-verification process via an automated phone call. Toss directly sends money from each customer’s bank account without any more verification steps, by processing the wire using the corporate banking network. A cumulative 300 billion won has been wired via Toss since the app’s launch last June, according to the company. Following its success, mobile messenger giant Kakao launched a new service last week called KakaoPay Send Money. Unlike Toss, it is designed to wire money in a KakaoTalk chatroom.

In the first quarter of this year, online shopping amounted to 15 trillion won, which is a 21.8 percent year-on-year increase, according to Statistics Korea. Mobile shopping accounted for more than 50 percent of this, at 7.76 trillion won, a 52.2 percent surge. In response to the expanding mobile payment market, the Bank of Korea decided to prepare to transition to a “coinless society” by 2020. The bank said there is still demand for notes.

“The Bank of Korea’s plan totally makes sense,” said Yoon Jong-moon, a researcher at the Korea Credit Finance Association Research Institute. “The growing number of mobile payment and money-wiring services will be able to replace cash.”

Cashless transactions help the government reduce the cost of issuing new notes and coins, and the possibility of illegal financial transactions like bribes and tax dodging, the institute wrote in a report.