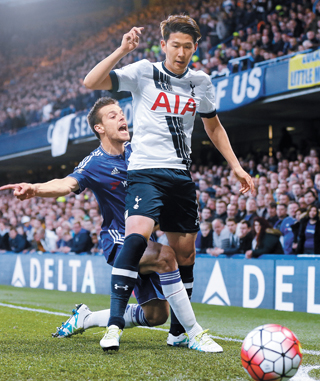 Tottenham’s Son Heung-min, right, battles for the ball with Chelsea’s Cesar Azpilicueta during the EPL match at Stamford Bridge in London on Tuesday. Son scored his third league goal of the season in the 44th minute for Spurs. [AP/NEWSIS]

Tottenham Hotspur’s Son Heung-min nabbed his third goal in the English Premier League (EPL) during the 2-2 draw in Tuesday’s match against Chelsea at Stamford Bridge.

Starting for Spurs for the first time in five games, Son stepped onto the pitch as right winger. While the Spurs were ahead 1-0 after striker Harry Kane’s early goal in the 34th minute, Son extended the lead for Spurs in the 44th minute when he received a pass from Christian Eriksen and scored with a right-foot shot.

Tuesday’s goal is Son’s first league goal since December 28, 2015, when he netted his second EPL goal against Watford. It is also Son’s seventh goal this year for Tottenham.

The 23-year-old Korean striker, who will join the Rio Olympics squad as the wild card after turning 24 in July, has had little playing time and recently has been subbed on to the pitch towards the end of most Spurs games.

His last start for the team was on April 2 when Spurs went up against Liverpool.

Some critics worried Son is losing ground in the team because of the downtime and it will lead to him losing his touch.

However, Son’s play on Tuesday revealed he can still put out lethal plays when given a chance, which is good news for Shin Tae-yong, Korean Olympics football team manager.

Despite the lead after the first half, the Spurs couldn’t hold on to their chance to clinch a win and conceded two goals to Chelsea in the second half, in the 57th minute and again in the 82nd minute to end the match with a draw.

Adding only one point to their league standings, the Spurs’ shot at the league title is over. They needed wins from all three remaining games, including Tuesday’s, to stay in the running for the league trophy.

Regardless, Tottenham’s tie game with Chelsea helped make a bit of football history. Because of the draw, Leicester City FC, who had a 1-1 draw with Manchester United on Sunday, secured its first Premier League title in its 132 years of history, the victory which has been dubbed one of the greatest upsets in the English football history.