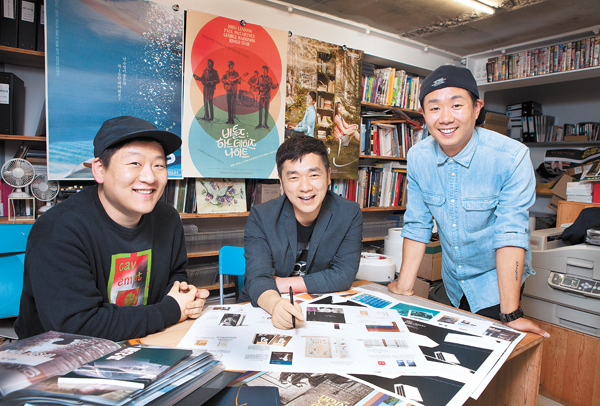 A film poster is like a signboard for a restaurant.

In the case of films, the role of a signboard, or poster, becomes much more complex.

In addition to providing basic information about the movie, such as who stars in it and what it’s about, the poster’s design elements such as color combination, texture and style establish the overall ambience of the movie.

This is according to a design lab called Propaganda that has specialized in designing posters for films and other forms of entertainment such as musicals and TV dramas for the past eight years.

Comprising three talented graphic designers - Choi Jee-woong, Park Dong-woo and Lee Dong-hyoung - all of whom are also film enthusiasts, Propaganda is one of the most active design labs in the industry at the moment. They said they currently have more than 10 ongoing projects on their hands.

From the recent Cannes-invited commercial movie “Train to Busan” to more artistic films like Wes Anderson’s “The Grand Budapest Hotel” (2014) and local auteur Hong Sang-soo’s “Right Now, Wrong Then” (2015), Propaganda has been shaping the image of diverse types of films.

In addition, the team was not afraid to handle documentaries about the sensitive issue of the Sewol ferry tragedy: “Upside Down” (2016) and “The Truth Shall Not Sink With Sewol” (2014). Their posters have been reviewed to have delivered the nuance of the films properly through provocative design layout and features.

“What differentiates us from other poster design labs is the fact that we make posters for diverse genres and sizes of films,” Choi said in a recent interview with the Korea JoongAng Daily at their design lab, located in the posh neighborhood of Garosu-gil in Sinsa-dong, southern Seoul.

The three-member team’s cozy office was filled with eccentric collectable items related to films, which mostly belonged to Choi, who revealed himself as an avid collector.

That was not all. With screenplays of yet-to-be-released films and continuity books filled with sketches of film scenes, the lab is a haven for any film enthusiast.

But according to the designers, “capturing the quintessential scene that would best suit a poster of just from reading the book” is one of the biggest dilemmas of designing film posters.

During the interview, the designers gave a behind-the-scenes look at how these posters are made. Below are the highlights of the interview. 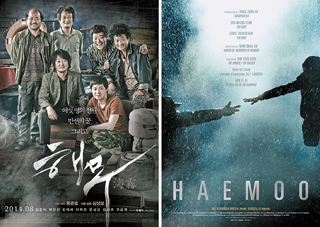 For “Haemoo” (2014), Propaganda emphasized the lead actors for the domestic poster while putting the overall ambience at the forefront for overseas version. [PROPAGANDA]

Q. Can you briefly explain how a film poster is made?

Choi: Generally, a lot of people think we churn out posters mechanically based on still cuts provided by the film company, which is not true at all. Our job starts with designing a book cover for a screenplay to be distributed to actors, the director and other staff on set, which starts as early as a year before the final release of the movie. In the case of Korean movies, we shoot a separate photo for the poster about midway through the film shoot or at the very end. But that is not all. We are involved in every possible design element that doesn’t have to do with motion pictures, such as designing the leaflets, the outside cover and inside layout of a press kit, all types and sizes of banners that get hung up in theaters and all the promotional stuff. Recently, we even had to design a cover for doughnut boxes.

What about foreign films?

Choi: In the case of foreign films, we have to make posters based on limited resources that are provided to us such as still cuts and the original poster layout. If the original poster is decent enough, we don’t do extra work on them, but focus on designing the font style for the Korean title. “The Grand Budapest Hotel” is an example of that. Its original poster was really good. But foreign film posters have their own hardships as well, because we still have to get confirmation from the head office. In the case of Japanese films, we realized that their culture prefers something very natural, which is why they are not used to making separate film posters but just make them with still cuts. They don’t want us to retouch the actors’ faces. There was a time when I erased a spot on Joe Odagiri’s face and had to remake it.

Is there a difference when designing a domestic and foreign version of the film poster?

Choi: For domestic version, the safest and the most popular method is stamping the actors’ faces big on the poster. But although it is for the same movie, if it is for the overseas market, we emphasize ambience, because foreign audiences wouldn’t know who these Korean actors are anyway. The domestic and overseas versions of the recently released “Love, Lies” and “Haemoo” (2014) are the best examples.

What is the hardest part of your job?

Choi: Coming up with ideas. How we want the actors to pose and where we want them and what other props we want to include in a poster are all under our responsibility.

So every possible design element in a poster is in your hands?

Choi: Pretty much. But it is not as good as it sounds because all of these factors have to get approved by all the interested parties, such as the actors’ agencies, distribution companies, investors and so on. This process takes a really long time.

Park: It sometimes takes more than a month to reflect all the requests for revisions from different parties. But when the revised version also gets rejected, that is when everything gets frustrating.

What kind of demands are made for the posters?

Choi: It depends on what type of film it is. If it stars A-list actors, the majority of demands are related to the actors, such as who should be front and center. When there are more than one top stars in a movie, which is mostly the case these days, combining all the requests from them gets more difficult. In the case of art-house and independent films, we are more on our own.

Park: With the film industry expanding, there are more elements to consider when making films. It is not only about lead actors but these days supporting actors are as big and famous, which is why we started to make various versions.

Speaking of which, Propaganda is also very well-known for designing artistic posters for independent and art-house films. How are those designs possible?

Choi: [It is possible] because we can reflect our preferences more directly, whereas we have to think more about our clients’ preferences in the case of big commercial films. I guess we show our desire and passion for design when we do these types of small movies. We also do projects with the Korean Film Archives when they do special exhibitions such as retrospectives. They delegate 100 percent of the job to us, and I guess we have the most fun working with them.

Do you receive feedback from the audience?

Choi: There is a lot. Some compliment us and some doesn’t hesitate to show their discontent. One time a certain actor’s fans called the film company, complaining that the poster ruined their star’s face. But that is also the best part about making posters. We get to receive feedback right away, especially with the emergence of social media. We pull all-nighters to design certain projects and the result gets published in, say, a magazine, right away the next day. And the audience responds to that on Internet.

From left: A poster for the Cannes-bound “Train to Busan” (2016) ; An overseas poster for Hong Sang-soo’s “Right Now, Wrong Then” (2015); a domestic poster for Yorgos Lanthimos’s “The Lobster” (2015); a poster for an exhibition on Quentin Tarantino; and one for the controversial documentary “The Truth Shall Not Sink With Sewol” (2014).