Crowdfunding platforms take off in Korea

Crowdfunding platforms take off in Korea 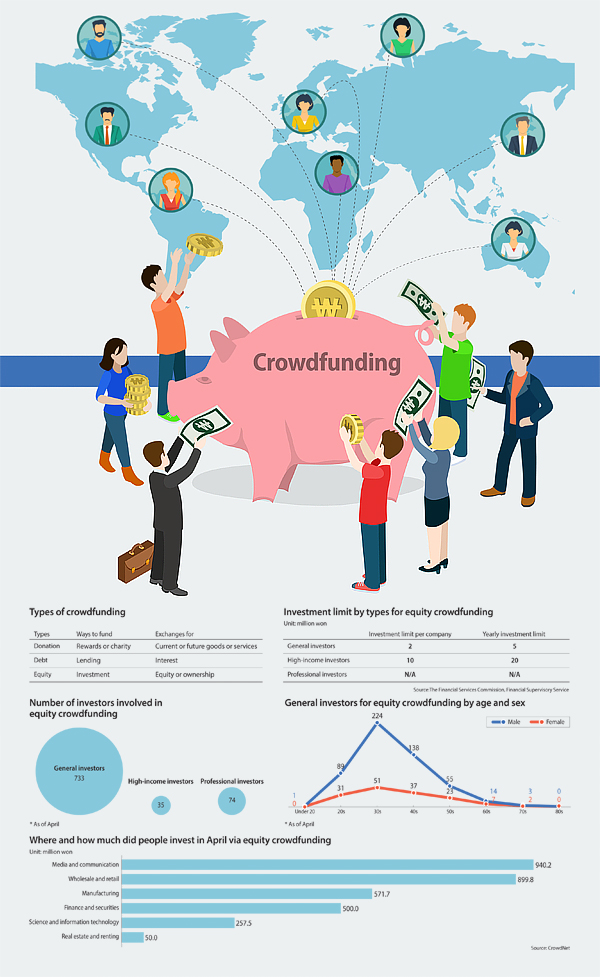 Hwang Jae-ho had an investment problem.

As the CEO of Marine Techno, a small biotechnology firm based in Yeosu, South Jeolla, he needed to attract the funds necessary to develop the innovative cosmetics made from recycled marine by-products that his company was known for.

“We faced various hardships raising money, since 90 percent of investment goes to companies operating in Seoul and Gyeonggi,” Hwang said.

So when he heard about the nation’s first crowdfunding platform, CrowdNet, which would be operated by the Korea Securities Depository and open on Jan. 25 this year, he figured: why not give it a shot?

Marine Techno achieved its target of 80 million won ($70,000) in the first day. By the end of its first week, the company had raised 127 million won.

Surprising nobody more than Hwang himself, the company has since been considered the first successful case of crowdfunding in Korea.

It has been 100 days since the Financial Services Commission (FSC) approved crowdfunding platforms as part of its efforts to support the creative economy and fintech initiatives, and they’re gaining steam.

According to the FSC, some 2,300 people have invested a total 5.74 billion won in 72 companies through the platforms since April, up from 1.87 billion since the end of February.

About 5.1 billion won was given to 32 companies that successfully finished their campaigns through equity crowdfunding.

Crowdfunding is the practice of funding a project or start-up by raising money from a large number of normal people rather than a handful of wealthy investors.

The idea itself isn’t new, but its modern iteration has become more popular in recent years with the increasing prevalence of social media and easier access to Internet around the world.

Equity crowdfunding was first officially introduced in Korea earlier this year. The idea is very similar to how common stock is traded on the stock market. Individuals become shareholders of the companies in which they invest and are eligible to receive dividends as a result.

Other widely used types are rewards, donation and lending crowdfunding.

Rewards crowdfunding is when people donate a certain amount of money and receive current or future goods or services from individuals or companies in exchange.

Lending crowdfunding is when people lend other individuals or companies money with the expectation that they will receive that money back with interest later on.

There is also donation crowdfunding, in which people give money expecting nothing in return.

The latest data from the FSC and the Financial Supervisory Service (FSS) shows that the market for crowdfunding is growing rapidly in Asia.

Lending crowdfunding is the most common type in Korea, accounting for 56 percent of the market as of 2014, while rewards and donation crowdfunding accounted for 36 percent, according to the FSC and FSS.

According to CrowdNet, people in their 30s were most interested in crowdfunding, followed by those in their 40s and 20s, respectively.

Among the 675 general investors who invested via equity crowdfunding in April, people in their 30s accounted for 41 percent of the total.

CrowdNet’s data showed that men were more involved in crowdfunding than women.

“People in their 30s are more likely to be familiar with the stock market and the Internet, and I think this might be the reason for them taking a big portion in equity crowdfunding,” said Park Seok-dong, chairman of the Korea Crowd Funding Association, a nonprofit that provides information about crowdfunding to both start-ups and investors.

By industry, media and communication-related start-ups received the most investment last month at 940.2 million won, followed by companies in the wholesale and retail industry and the manufacturing industry.

There are three types of investors for equity crowdfunding.

General investors are those with annual income under 100 million won and are limited to investing 2 million won per company and a total of 5 million won each year.

Professional investors like venture capitalists and angel investors are not restricted in their investment, according to the FSC.

The government says the rules are intended to protect investors.

Mohenic Garages, the nation’s first car restorer, is another success story when it comes to equity crowdfunding. The manufacturer’s campaign also started at the end of January and lasted until the first week of March.

Mohenic Garages launched a campaign for 300 million won and successfully met the goal with only about 230 investors.

“I myself have invested a small amount of money in one local indie band so that they can make their own music videos, and I find the idea of crowdfunding very attractive,” said Henie Kim, CEO of the restorer.

“Before crowdfunding emerged, investors typically only considered a start-up’s documents or profitability, but those who participate in the platform are actually looking at the companies’ vision and passion.

“I believe that the 230 people are not investors but our fans that will stay with us for a long time, and it means a lot to us.”

Hwang at Marine Techno also added that companies based in non-metropolitan areas can particularly benefit from crowdfunding.

“It is a great opportunity to hear what other people think about companies’ items while attracting funds at the same time,” Hwang said.

The number of crowdfunding sites is on the rise as the market is getting bigger. There were only five websites that provided the service in March, but that rose to eight in April.

“There are both strengths and weaknesses to the crowdfunding system, but I believe that the positives are more numerous than the negatives,” said Ryu Ho-joon, a representative at Wadiz, one of the biggest crowdfunding websites in Korea.

“Investors can buy creative products that are not available at ordinary stores, while start-ups can get funded without having to have their products ready ahead of time.

“The only way I can say it is that a new paradigm has been formed,” said Park Seok-dong, chairman of the association. “People with a relatively small amount of money or just a couple million won in their bank account thought they had no way to invest their money to make profits, but now they are able to do so via crowdfunding.”

According to Park, more people choose to invest in start-ups, since they promise higher returns than those provided by local financial institutions. He added that people used to take out loans from banks to do business, but now they look for individual investors to chip in instead.

“It is growing rapidly and will continue to do so from now on,” he said.

Even though crowdfunding is getting more popular among Koreans, not many foreigners are currently participating in local platforms.

“Only a few foreigners are investing in start-ups through local crowdfunding platforms as of now,” said Ryu at Wadiz. “The payment verification system is a bit complicated for foreigners. We are discussing this issue and are trying to improve it with the FSC right now.”

The FSC did acknowledge that not many foreigners are participating in local platforms, but said that it is still early in the process for the Korean crowdfunding platform to get settled.

“There are no laws prohibiting foreigners from investing in local start-ups, and it is just the payment system that holds them back,” said Kim Young-dae, an official at the FSC. “Equity crowdfunding is different from shopping at online retail stores such as 11st or Gmarket.

“It is more similar to trading stocks, in that foreigners need to open a bank account and a securities account in Korea if they want to invest. The number of foreigners will increase eventually.”

Park at the association added that Chinese and American crowdfunding platforms are some two to three years ahead of those in Korea, and that people from those countries will become interested in local platforms because they are already familiar with their own models.

“I heard that some 70 percent of start-ups established by Chinese undergraduates are funded by crowdfunding, and Chinese might come to play a bigger role in Korean platforms in the future as well,” Park said. “And I believe many more foreigners, including those from the United States and China, will look to make profits through Korean crowdfunding platforms.”