Police find upper half of corpse by lake

Police find upper half of corpse by lake 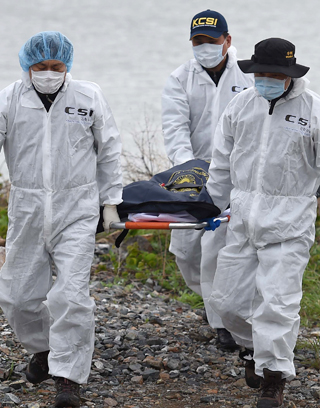 A police forensics team transports the upper half of a corpse, presumed to be the other half of a body found Sunday, near Daebu Island in Ansan, Gyeonggi. [NEWSIS]

Police found the upper half of a corpse at 2 p.m. on Tuesday at Sihwa Lake in Ansan, Gyeonggi. This is presumed to be the rest of a body, the lower half of which was found near the Buldo seawall on Sunday.

The place near a dock where the remains were found is 11 kilometers (7 miles) from the location where the lower part of a corpse was found. Both places are located along Road 301.

The victim’s face was unidentifiable due to decomposition, and fingerprint identification was expected to take several hours since the body was significantly waterlogged. After the National Forensics Service compares the DNA of the upper and lower body halves, and if both are identified as coming from the same corpse, an autopsy of the upper part will be conducted, according to police.

Police are analyzing footage from a CCTV installed near the location where the upper half of the body was found and are distributing flyers to help identify the victim. Police have posted a 10 million won ($8,770) reward for anyone who can offer decisive clues in identifying the victim.