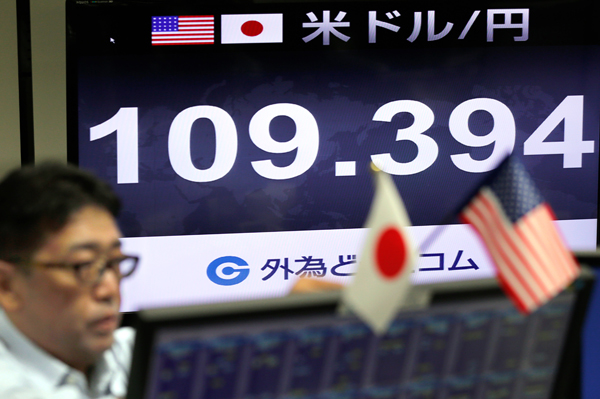 A money trader adjusts flags of Japan and the U.S. in front of a screen showing the day’s exchange rate between yen and the U.S. dollar at a foreign exchange brokerage in Tokyo on Thursday, April 7, 2016. [AP/NEWSIS]

The foreign exchange market is notorious for overshooting. A currency that starts moving in a particular direction as economic fundamentals change will often end up at a rate that can’t be justified by the data. So trying to nudge the matrix of currency values is akin to policy makers attempting to steer a Ouija board pointer — which is exactly what seems to have happened since their February Group of 20 meeting in Shanghai produced a tacit truce in the currency war.

Suspicions that finance ministers had agreed in February to stop talking their currencies down seemed confirmed by the dollar’s decline of more than 6 percent from its Jan. 20 peak. China’s recent moves to boost the yuan’s reference rate to its highest levels this year also backed the impression of a suspension of hostilities.

But while U.S. manufacturers worried that a too-strong dollar would threaten their exports and profits, the recent reversal, and gains for the euro and the yen, pose bigger risks to the struggling economies of Europe, and Japan. The euro, for example, pierced $1.16 on Tuesday, reaching its highest level since August. The yen, meanwhile, has breached 106 to the dollar, down from as weak as 122 in January.
Those are the kinds of moves that make central banks uncomfortable — especially when, like the European Central Bank and the Bank of Japan, they’re already struggling to avert deflation. Australia’s surprise decision to cut interest rates overnight, driving its currency lower against all 31 of its major trading peers, is a sign that skirmishes might be breaking out again. Marcus Ashworth, a strategist at Haitong Securities in London, said in a research note:

The rumor mill has been incessant (despite official denials) that the so-called Shanghai G-20 accord to pacify markets and quell unrest between the members has actually served to make international relations as toxic as they have been for many years. The Shanghai deal was to stop the negative feedback loop and thereby prevent a sharp devaluation of the yuan; however, it was meant to curtail the rise of the dollar, not sharply reverse it.

Ominously, the U.S. Treasury on Friday produced a new “monitoring list” of activity in the foreign-exchange market as part of the Trade Facilitation and Trade Enforcement Act of 2015. There are three criteria to qualify for special attention: A “significant” trade surpluses with the U.S., a “material” current account surplus and “persistent one-sided intervention in the foreign exchange market.” While five countries made the list by triggering two alarms — China, Japan, Korea, Taiwan and Germany — the Treasury said no one “currently meets all three criteria.” The report did, however, wag its finger at the currency policies of the first four countries.

It doesn’t help the dollar that traders have been scaling back their expectations for whether the Federal Reserve will raise interest rates in June, or indeed later in the year. The futures market currently anticipates just a 10 percent chance of a move next month, down from 40 percent a month ago; you have to look forward to the Fed’s December decision before seeing a better than 50 percent chance of higher borrowing costs.

It’s clear the Treasury doesn’t want the dollar to resume its ascent. But it’s also clear that trying to steer the currency market into stasis has failed, and that the inflation outlooks in both the euro zone and Japan are deteriorating. The environment looks ripe for hostilities to break out again, providing yet another reason to be pessimistic about the prospects for a global economic recovery.