Pyongyang ushers in the era of Kim Jong-un

Pyongyang ushers in the era of Kim Jong-un 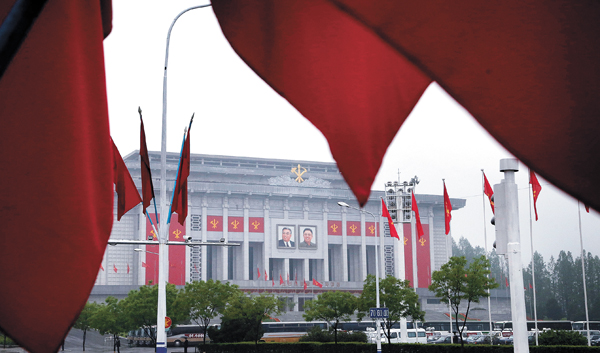 The April 25 House of Culture, the venue for the seventh congress of the Workers’ Party of Korea, is seen framed by the Workers’ Party flags decorating the streets on Friday in Pyongyang. North Korea on Friday raised the curtain on what promises to be the country’s biggest political show in years, if not decades. [AP/NEWSIS]

North Korea kicked off its biggest political event on Friday in order to showcase its young leader, Kim Jong-un, and boast the military and economic achievements that have been made under his watch.

The seventh congress of the Workers’ Party began at the April 25 House of Culture, with nearly 3,000 delegates, elected at lower party meetings across the country, in attendance. The approximately 120 foreign journalists who were in Pyongyang for the event were not allowed inside the building, The Associated Press reported.

The rare gathering, which draws the country’s political elites into one place, is expected to last three to four days, with the focus on solidifying Kim’s leadership and picking party officials deemed loyal to Kim for top positions.

While no detailed reports on the proceedings of the first day of the congress have been released as of press time on Friday, it was expected that Kim would deliver a keynote speech before the 3,000-member audience, touting the regime’s achievements.

Commemorating the once-in-a-generation political showcase, the North Korean media on Friday lavished praise on Kim’s feats as a national leader.

The state-run Rodong Sinmun said in its editorial that Kim was “leading the popular masses’ cause of independence and socialism to one victory after another.”

It is expected that the party will review the projects implemented since Kim took power in 2011, following the death of Kim Jong-il, and discuss revisions in the party regulations today. After a debate on the revisions to party rules, a resolution on major policy guidelines is expected to be adopted. Some experts in Seoul anticipate that the North could declare itself a nuclear state in the party charter. On the third day, the congress could elect new senior party officials with proven loyalty to the young leader, who set the international community on edge earlier this year with a recent nuclear test and a long-range missile launch.

“While the focus of the party’s sixth congress in 1980 was on elevating Kim Jong-il as heir-apparent [to Kim Il Sung],” an official from the South’s Unification Ministry said on the condition of anonymity, “the main aim this time is declaring that the era of Kim Jong-un has officially begun. The level of idolization for the young Kim will rise to that of Kim Il Sung and Kim Jong-il during the event.”