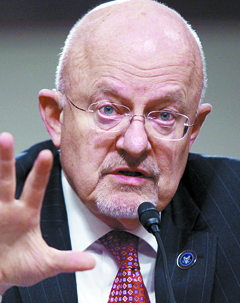 During his secretive two-day visit to Seoul, U.S. Director of National Intelligence James Clapper is said to have inquired about South Korea’s position on the possibility of Washington negotiating a peace treaty with Pyongyang, according to multiple government officials here on Friday.

“South Korean and U.S. intelligence agencies have made contact with each other numerous times to discuss assessments of the situation on the Korean Peninsula and the cooperation needed for information exchange,” a senior Korean foreign affairs and security official told the JoongAng Ilbo on the condition of anonymity.

“In particular, there was discussion of the possibility of North Korea taking an aggressive stand following its seventh Workers’ Party congress, which started on May 6.”

Clapper made a visit to South Korea on Wednesday and held closed-door talks with defense, military and Blue House officials to discuss the latest situation in North Korea, including its ruling Workers’ Party’s first congress in 36 years, which began on Friday and will last through the weekend, as well as the possibility of further nuclear provocations.

“There was also an inquiry into how much South Korea is willing to concede in case the United States begins discussions [related to a peace treaty] with North Korea,” the Korean official said.

A peace treaty would officially bring an end to the Korean War, which started in 1950 and concluded with an armistice agreement in 1953.

Seoul has maintained the position that the denuclearization of North Korea should be a priority for any sort of dialogue.

However, China has pushed to move forward with the denuclearization of North Korea in tandem with transitioning from an armistice to a peace treaty earlier this month, amid international pressure to impose stronger sanctions on Pyongyang.

Despite calling for the implementation of strong unilateral and UN Security Council sanctions on Pyongyang, U.S. officials, including Secretary of State John Kerry, have emphasized that Washington is open to negotiating peace treaty talks with Pyongyang.

North Korea is also expected to push for peace agreement talks after its congress concludes, according to analysts. The congress is expected to frame the North’s political and economic agenda, and solidify leader Kim Jong-un’s regime.

The New York Times in an editorial on Monday pointed out that “An opportunity to get the dialogue going again may present itself after the party congress.”

Should such an opportunity arise, it added that the Barack Obama administration “should be nimble and creative enough to work with such a proposal,” despite difficulties in dealing with North Korean leader Kim Jong-un.

North Korea’s state-run Korean Central News Agency carried a statement Wednesday that said Washington had again “snubbed” its proposals for peace treaty talks. South Korea was not a signatory to the July 27, 1953, armistice agreement, which involved the UN Command led by the United States, and China and North Korea. At the time, South Korean President Syngman Rhee opposed an armistice.

“In a situation where China has raised the need [for a peace treaty], and the United States feels a certain need for it, should the diplomatic line discuss the issue, it would become a formal agenda,” Chun Chae-sung, a professor of political science and international relations at Seoul National University, said regarding intelligence chief Clapper’s closed-door talks.

“This seems to have been an unofficial sounding out of positions.”