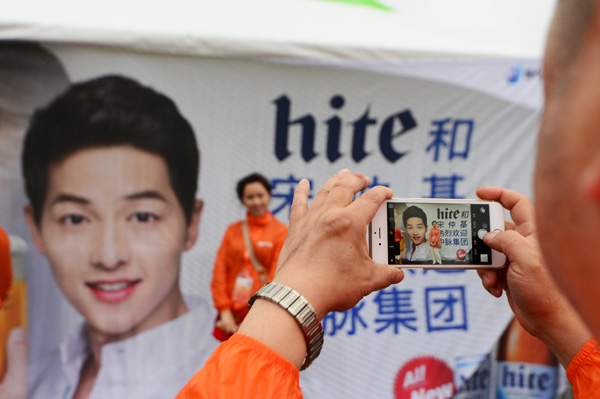 Rain didn’t dampen the spirits of some 4,000 Chinese tourists who sat alongside Seoul’s Han River in raincoats on Friday enjoying a bowl of Korean traditional chicken soup, samgyetang.

They enjoyed samgyetang and kimchi washed down with about 8,000 cans of beer and 1,800 bottles of Korean traditional wine called Baekseju, provided by Kooksoondang Brewery.

The workers are staying for four nights starting May 5 at 16 different hotels in Seoul. Another 4,000 from the same company are expected to hold the same samgyetang dinner at the same place on Tuesday and will stay in Korea until Friday.

Each of the 8,000 Chinese are expected to spend 3.3 million won ($2,855) between May 5 through May 13, or 26 billion won as a whole. Korea Tourism Organization said the group will have a ripple economic effect of some 49.5 billion won.

The 8,000 Chinese tourists visiting Seoul is the largest single tourist group by far, bigger than the 6,000 Chinese employees of China’s cosmetics company Aurance International Beauty Group, who visited in March and held a massive chicken and beer event.

On Friday, more than 10 food trucks prepared samgyetang and some 400 young part-time workers helped serve the visitors, explain the ingredients and show some of the tourists how they should eat the soup.

“It is very delicious and I will definitely buy this soup when it comes to China,” said Yang Shu-rong, one of the Joymain employees said. “I will be the first person in line to purchase them.” 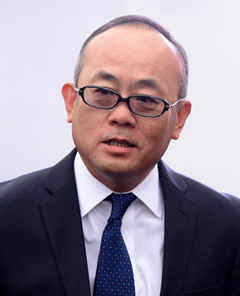 Previously, the Chinese government did not allow samgyetang imports, but the two countries recently agreed to allow it to be sold in China starting later this year.

One of the part-time helpers in her 20s, said that assisting the huge group was a great experience. “I am studying Chinese in my college and I am glad that I can actually try out what I have learned in school to a large number of Chinese at once,” she said.

Li Dabing, president of Joymain, said, “This is my fifth visit to Korea and I ate samgyetang every time. I will never forget about eating samgyetang with 8,000 people for the rest of my life. I would like to promote this samgyetang product when I go back to China.”

“In Korea, we treat guests with warm foods when special guests visit our home, and I chose the Han River, which is one of the most beloved places in Seoul by Koreans, and a warm bowl of samgyetang to welcome you all,” Park said.

Many of the tourists were also familiar with the popular Korean television drama “Descendants of the Sun.”

“I was curious about samgyetang since it appeared in an episode of the drama when two of the male main characters cooked it for their girlfriends,” said Chen Xiu-ming, a female employee of the company. “I am happy that I finally tried it and I believe it will be very popular in China since many Chinese are interested in Korean culture including drama. And, by the way, Song Joong-ki is so good looking.” Song is an actor who stars in the drama.

To add to the celebration, a number of Korean singers showed up on stage and sang songs from the drama’s soundtrack, while many of the Chinese tourists stood up and sang along.

A total of some 8,000 employees have been brought to Seoul on an incentive tour arranged by the city government.

Because of the large numbers, the group has been split into two. The second group is due to arrive in Korea on Monday and enjoy a samgyetang party on Tuesday. Both groups have plans for a shopping trip to Myeongdong in central Seoul and Lotte Department Store’s Jamsil branch in southeastern Seoul.

“It has only been a couple days since I arrived to Seoul but I already really like the place,” said employee Lin Li-juan on his first visit to Korea. “Koreans seem to have a higher standard of living and I really like trying out various kinds of Korea’s traditional culture and obviously samgyetang as well.”

When asked about her plans for the rest of her trip, employee Chen Xiu-ming said she wanted to do some shopping at duty-free stores. “I heard a lot of good things about Jeju Island, but I won’t be able to make it this time since we have to go back in two days. I really want to revisit this country.”

The samgyetang party was arranged by the Seoul City Government, Ministry of Agriculture, Food and Rural Affairs, Korea Tourism Organization, Korea Broiler Council and other organizations.