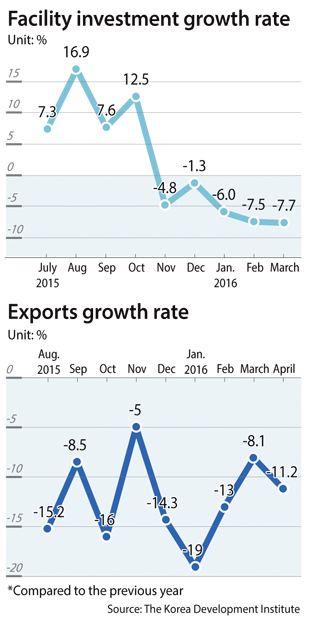 Although certain economic indictors have improved, Korea’s overall growth remains subdued in large part due to falling exports in April that have deterred certain types of investments, the state-run economic think tank the Korea Development Institute (KDI) said on Monday.

“April’s exports recorded a -11.2 percent growth, continuing the contraction of -8.1 percent in the previous month, influenced by sluggishness in most items, excluding vessels,” the KDI said in a report.

Exports to Asean countries increased 7.1 percent, whereas those to China dropped by 18.4 percent and those to Japan fell by 25.5 percent.

“The manufacturing industry’s capacity utilization rate continued to stay low at 73.2 percent in March, down from 73.5 percent in the previous month, meaning overall production activity remains dull,” the KDI said.

“Moreover, the domestic machinery orders received, a leading indicator for seolbi investments, slumped with a mere year-on-year growth of 0.2 percent in the first quarter.”

Construction investment, on the other hand, rose 23.3 percent year-on-year in March as both sectors for building construction and civil engineering increased.

Meanwhile, apartment transactions posted a large drop of -38 percent to a record 49,179 units in March from a year ago, according to the KDI. The report showed that the labor market also is still very weak.

A total of 300,000 people got new jobs in March, up 1.2 percent from the previous year. However, the growth rate has fallen from 1.4 percent in January.

In March, the seasonally-adjusted unemployment rate remained high at 3.8 percent, continuing on last months’ trend at 4.1 percent. Retail sales in March improved somewhat significantly, according to the report.

The composite consumer sentiment index rose to 101 in April from 100 in the previous month.