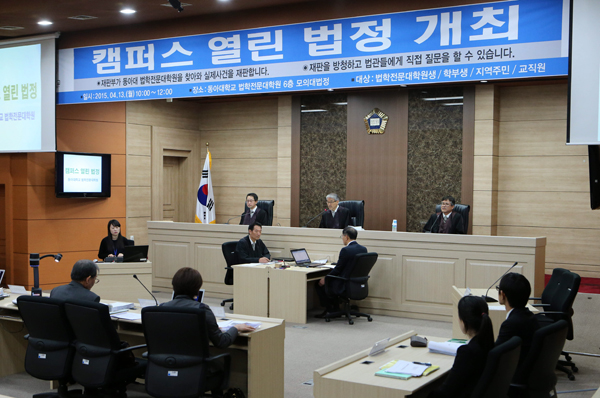 In the United States, law school applicants need to provide LSAT scores, undergraduate transcripts, recommendations and personal statements. The personal statement is a crucial part of the application process, and there are various guidelines on how to write it.

In Korea, application packages to the graduate law programs include LEET scores, undergraduate transcripts and personal statements as well. The personal statement must not include parents and relatives’ careers. It is a way to prevent favoritism to the children of legal professionals or high-ranking officials. The guideline is a product of distrust that those in the same field may get special treatment.

However, things are not as corrupt as one may worry. Company executives or law school professors with sound minds would know very well that incompetent applicants who grew up without really trying to achieve something would often drop out. A Seoul University law school professor said, “Most of the admissions committee members were appalled by applicants who revealed that their parents were lawyers rather than feeling favorable toward them.”

A personal statement is a writing to introduce oneself, and it is a self-contradiction if one discusses one’s parents.

Let’s say a son of a great human rights lawyer was influenced by the father who devoted his life to justice despite poverty and decided to become a lawyer. He would make a great attorney. However, in the current system, he cannot write about the story in the personal statement.

It all originates from the distrust spread in our society. People are full of suspicion and have concluded that the son of a lawyer would be favored over a son of a construction worker. However, it is more likely that the stories of applicants who overcame hardship would get higher marks.

In the recent controversy over the law school application process, a number of accepted students violated the ban on mentioning parents’ and relatives’ careers. While they were wrong to violate the rule, it may be necessary to review the codes. It may be better to allow applicants to discuss their parents and families, which may or may not benefit their chances of acceptance.