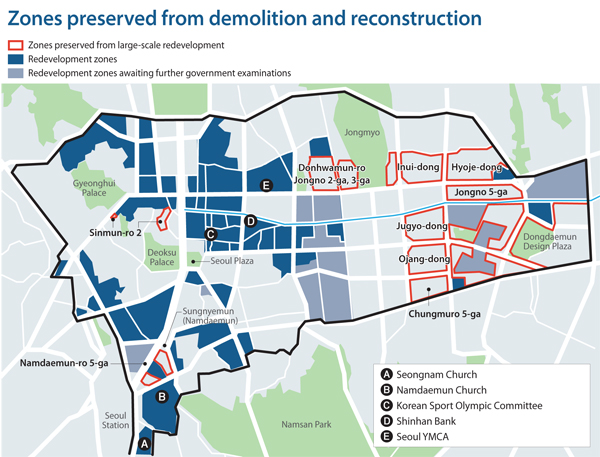 The days of bulldozing architectural treasures and replacing them with dreary concrete commercial buildings are finally coming to a close, as large-scale redevelopment projects in designated areas within the Seoul City Wall will be made illegal in order to preserve historical and cultural sites, the Seoul Metropolitan Government announced Monday.

The “2025 Urban Environment Maintenance Plan” will likely be open to the public by July, and will effectively seal off about 1.1 million square meters (271 acres) within the Seoul City Wall from redevelopment, including sites in Iksun-dong of Jongno District, Jongno 5-ga, Hyoje-dong, Namdaemun-ro 5-ga, Chungmuro 5-ga and the Dongdaemun Design Plaza. Buildings preserved from demolition for their historical value will include the Namdaemun Church in Namdaemun-ro 5-ga, Shinhan Bank in Samgak-dong and the Korean Sport Olympic Committee building in Mugyo-dong of Jung District, central Seoul. Also protected will be the Sungnam Church in Dongja-dong and the Seoul YMCA building in Jongno 2-ga, Jongno District.

All told, the new plan will protect 30 percent of the areas formerly designated as redevelopment zones within the Seoul City Wall.

“Redevelopment in the city after 1970 focused on the complete destruction of certain areas and the expansion of business and commercial facilities, which often destroyed historical sites,” said a Seoul Metropolitan Government official. “The new redevelopment plan makes such large-scale redevelopments impossible.”

The level of permitted redevelopment within an area for commercial purposes is determined in cubic meters, which not only regulates outward growth but upward growth, as well, functioning as a kind of height restriction law. The new plan, therefore, will permit the current level of commercial space within Seoul City Wall to remain the same, while requiring a 14.3 percent reduction in Sinchon and a 25 percent reduction in Cheongryang-ri. The only exception to this will be if a district intends to build public or energy-efficient facilities.

Not all areas in Seoul will be targeted as preservation zones, however. The Seoul city government plans to expand redevelopment projects in underdeveloped zones outside the central city area.

Areas in Yongsan and Yeongdeungpo districts, and Cheongryang-ri, will be designated for redevelopment. These areas include the business district of Namyeong-dong, old apartment towns near Samgakji Station and Chunghyeon-dong of Seodaemun District, western Seoul.

“[The city government is] essentially pursuing a two-track system, whereby preservation and redevelopment are pursued together,” said Jin Hee-seon, head of the Urban Restoration Headquarters of the Seoul Metropolitan Government.