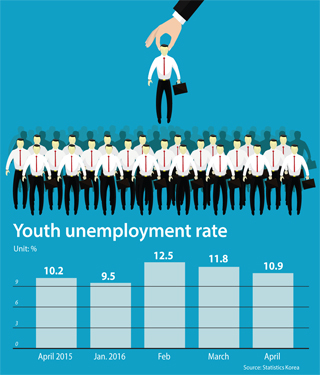 Korea’s labor market continues to drag its heels, especially for people in their 20s, while the youth unemployment rate remained in the double digits for the third month in a row, sitting at 10.9 percent in April among job seekers aged 15 to 29, according to data released Wednesday by Statistics Korea.

Youth unemployment reached its highest level in February at 12.5 percent and remained in the double digits in March at 11.8 percent. The 10.9 percent rate for April is the highest since 1999, when the government started compiling such data, and it clearly shows that young people have greater competition than previous generations.

By region, Incheon recorded the highest unemployment rate at 5.2 percent. Jeju’s rate was 1.8 percent, the lowest in the nation, and Seoul recorded 4.4 percent in April.

And as employment among males has fallen, it has risen among females, Statistics Korea reports, noting that the employment rate for males was 70.9 percent while that of females was 50.1 percent in April.

The number people who are economically inactive but are attending private institutes, such as those teaching foreign languages in order to help people secure jobs, is 637,000, an 8.1 percent rise from the previous year.

As of April, the total number of employees nationwide stands at 26.15 million, up 252,000 from last year largely due to an increase in the number of seniors adults who are working. There were 206,000 more people aged 60 and over who were working as of April compared to the previous year.

On the other hand, the number of people in their 30s who are working dropped by 22,000 while the numbers of those in their 40s dropped by 52,000 during the same period.

Hospitality, restaurants and service sectors hired more employees, while the number working in the retail and manufacturing industry fell.

“The fall in exports pulled down the rate for manufacturing industry,” said Kim Ih-han, a director at the Ministry of Strategy and Finance. “We expect that the labor market will recover in near future as the government continues to work hard to encourage investments in newly developing industries and designate regulation-free zones around the country.”

In fact, the government announced last month some of the specifics of a plan to expand work possibilities for young people and women, including pregnant women.

The ministry said it will help former interns who are hired at small and midsize companies build up at least 12 million won ($10,251) in savings within two years through government funds. Moreover, the ministry decided to extend the due date on student loans for some people working at small and midsize companies and to raise the amount of monthly financial support for women on maternity leave from 200,000 won to 300,000 won.