A total of six animated movies hit theaters this month, but one of them is especially familiar to Korean audiences: the big-screen version of “Hello Jadoo.”

This domestic animated TV show about a tomboyish 10-year-old girl named Jadoo is already highly popular, but this is its first time being screened in movie theaters. The everyday lives of Jadoo and her family make even adults smile, as people can sympathize and reflect on their childhood.

By the time it started airing on SBS and Tooniverse in 2011, it was even considered a potential rival to the popular cartoon “Pororo the Little Penguin” that had been capturing attention since 2003.

An abundance of foreign fans also make “Hello Jadoo” a global hit. The animation has been exported to Asian markets such as Thailand, China and Hong Kong, and it was once rated the most-viewed program on the Disney Channel in Taiwan.

Yet the domestic animation market remains a difficult place to succeed. Many might wonder how “Hello Jadoo” was able to make it this far, and as explained below it had many factors working in its favor.

“There were more than 10 kinds of romance comic magazines,” cartoonist Lee Bin recalls when thinking of the 1990s.

Back then young girls used to collect pocket money to buy romance comic magazines - which usually featured stories of princesses - and often rented them from comic rental stores.

After “Renaissance,” which was the first-ever romance comic magazine first published in 1988, other magazines followed the trend: “Mir,” “Daengi,” “Nana,” “Wink,” “Mink” and “Issue” are some examples.

The magazine “Party” can still be found on bookshelves today. It was published by Haksan Publishing to compete with another popular magazine, “Mink.” While others perished with the emergence of online comics or webtoons, “Party” remains as the only monthly romance comic magazine still being published. “Hello Jadoo” is one of the comic series that has been helping keep the magazine going since its first year.

Lee, the creator of the comic series, recalls her childhood during the 1970s and ’80s for the episodes she writes. She writes about lunch time, when students had to pack their own lunch and share their food. Such everyday episodes are what most people remember from the past. Therefore, for adult readers, the original comic stimulates nostalgia, while it generates curiosity for the younger generation.

The series was published in the form of books and a total of 23 books have sold more than a million copies domestically.

The inherent strength of “Hello Jadoo” is its ability to absorb readers, which is why Lee Jin-hee, the CEO of the production company Atoonz, took notice of the comic. She has spent roughly 20 years in the domestic comic industry, starting out as a producer at Tooniverse. 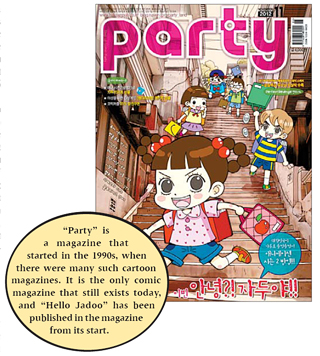 Lee Jin-hee has been working to build up the domestic animation industry since she launched the production company Atoonz in 2000.

Shows based on the “Jaedong” comic series, including “Let’s Go to School Jaedong” and “Jaedong’s Family,” were the first to be launched. The series aims to paint a big picture, featuring Jaedong first appearing as a kindergartener and later grown into a father.

She thought the “Hello Jadoo” series had enough substance to be made into a television series as well, and expected it to have a run of at least 10 seasons. She decided that the show should take place in contemporary society, while the original comic series takes place 30 to 40 years ago, and she made a license agreement with cartoonist Lee. Therefore, the movie of the same title focuses more on the stories within Jadoo’s family, while the original cartoon focused on bringing readers to remember their childhoods.

A veteran staff took part in producing the animated series. Lee Bin agreed to making considerable changes to the setting, while supervising the overall plot. In addition, director Son Seok-woo, who has been working with Atoonz since the “Jaedongi” series, joined the project.

As Lee Jin-hee puts it, the animation and character business “requires a lot of time and effort, just like raising children.” A lot of capital is necessary as well. Therefore, Lee cooperated with CJ E&M to raise capital for making screenplays and creating the theme song. This is how the animation first found its way to television in July 2011.

The year 2011 encouraged those working in the domestic animation industry with several cases of unexpected success. The animated movie “Leafie, a Hen Into the Wild,” directed by Oh Seong-yoon, sold two million tickets in theaters, and “Robocar Poli,” a television series on EBS, gained many young fans, along with “Pororo the Little Penguin.”

In such a favorable atmosphere, “Hello Jadoo” was launched, and its viewership rating on Tooniverse reached up to 4.47 percent within three weeks among the targeted age group of 4 to 14, according to research done by AGB Nielson Media Research.

Recently, the animation went on to captivate Chinese viewers through a video on demand contract with China’s largest online video platform, Youku and Tudou.

“It is significant that it has proven the potential of family animations, which were considered impossible [to be successful in the export market],” said Lee Jin-hee.

According to the Korea Creative Content Agency, the domestic animation and character business makes up only 10 percent of the total revenue of the Korean content industry as a whole. But Lee says, “It has improved a lot, compared to 15 years ago.”

“The overall quantity of the production of animations has increased considerably, with animations now using different kinds of resources such as popular webtoons and dramas,” she said. 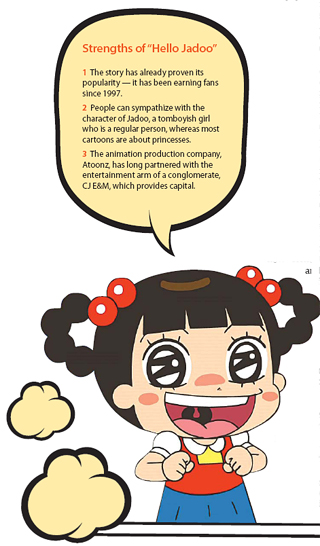 Despite such improvements, there are still several hurdles for the domestic animation business. An episode of a TV animation series often lasts just 10 minutes, meaning that producers are used to making short stories, while movies have to capture the audience’s attention for more than an hour.

The movie “Hello Jadoo” is an adventure story in which Jadoo accidently jumps into old children’s stories when she visits an amusement park with her family. The first half of the movie is based on “Cinderella,” as Jadoo becomes “Jadoorella.” The other half is an adaptation of “Hansel and Gretel,” in which Jadoo’s siblings escape from danger.

As can be seen from the plot, the first theater version of “Hello Jadoo” tries to use the narratives that most children are already familiar with.

“It is true that it couldn’t have one strong narrative as it consists of two different stories, but the problem will be addressed in the next edition of the movie,” she said.

Therefore, production companies often don’t earn profits even when their animations become popular. This is because, for one, it is hard for animations to turn a profit within the first two or three years of release, and the investment comes from diverse sources.

However, Lee has no plans to stop trying. “Who bears the most decides the winner in this industry,” she said. “I will do my best so that Jadoo can live with us for a long time.”