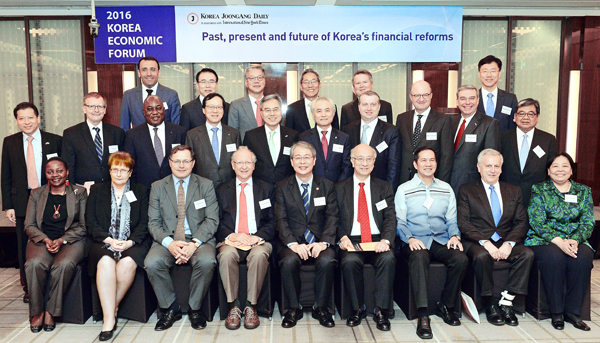 Foreign delegates and leading businessmen pose for a group photo after the Korea Economic Forum at the Westin Chosun Hotel in central Seoul.

Financial Services Commission Chairman Yim Jong-yong emphasized consistency and improved communication in the agency’s push to reform the financial industry, which began a year ago and is now entering its second phase. 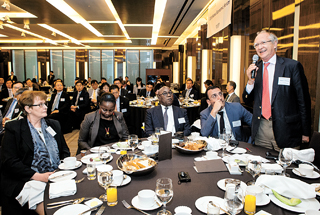 “In the past year, there have been huge changes in the financial industry, but after going through the reforms, there have been trusts built on the agenda,” the FSC chairman said on Thursday at the Korea Economic Forum held at the Westin Chosun Hotel in central Seoul. “To make financial reforms successful, consistency should be ensured.”

The FSC chairman said a few adjustments could be made if the situation changes and forces the nation’s key agenda to redirect, such as the recent corporate restructuring of the shipbuilding and shipping industries.

However, he said financial reform itself is not negotiable and must be followed through to step up competitiveness, while creating opportunities for innovation in the local financial industry.

“We will continue to push forward with the financial reforms with consistency and the mind-set that the financial industry’s status quo must not be left unchanged,” Yim said.

The FSC chief said he expects the second phase of the reform this year to be more challenging than last year, when the overhaul of the local financial industry had larger support from the public and a grander theme.

This time, the reforms will be on a smaller scale and focus more on improving ground-level customs and regulatory obstacles where there are more interested parties involved with different goals.

The FSC chairman said that since last year, financial authorities have been trying to listen to the difficulties and inconveniences that actual companies and participants struggle through.

Yim said the FSC created a special field inspection team last year that visited 668 financial institutions and collected 4,400 complaints and suggestions. Of the total, the FSC made changes to 46 percent.

The FSC chairman also stressed that he tried to implement suggestions made by the foreign business community as much as possible, giving the example of how it changed regulations to make opening up branches easier for foreign financial companies.

He said the FSC will continue this process this year and will reflect the voices heard from the field in its policymaking and deregulation efforts.

“The fundamental principle in deregulation is that the voices of financiers in the field are the most important source,” Yim said.

The financial policy agency’s chief mentioned several reforms that the FSC will pursue this year, including reforming the capital market so that it could provide more diverse services; expansion of crowdfunding that will allow more start-ups to get easier access to finances; cementing and expanding fintech, the fastest growing area in the financial industry today; and raising the possibility of more Korean services, such as the newly launched individual savings account.

“In the second phase, the most important reform is changing the capital market so that the financial industry development will be based on investments,” Yim said. “[Currently], the capital market has not properly played its role.

“Exchange markets including the Kospi, Kosdaq, Konex and the derivatives markets all operate as a different bureau under the single roof of the Korea Exchange, but this needs to be changed to be more competitive and active.”

“In Japan, that same ratio is 32 percent, while in the United Kingdom, it is only 18 percent, indicating that these other countries have more diverse profit models,” Yim said.

“Because we have put much emphasis on consistency, our financial reform that started last year was able to settle without much trouble in the actual field,” Yim said. “Regulatory reforms will also be made in the capital market this year.”