Pressure on gov’t over sterilizers is mounting

Pressure on gov’t over sterilizers is mounting 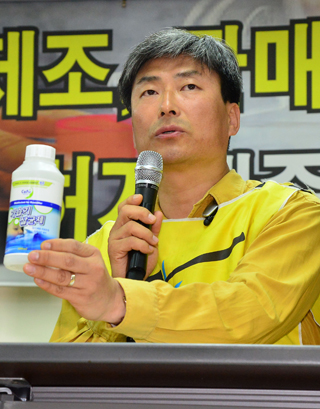 Choi Ye-yong, head of the Asian Citizen’s Center for Environment and Health, holds up a Cefu-brand humidifier sterilizer at a press conference on Thursday. [NEWSIS]

Opposition parties called for an apology from the Park Geun-hye administration for the humidifier sterilizer scandal that either killed or sickened hundreds of people.

“The Park administration must apologize to the public and show it is deeply regretful,” said Park Jie-won, floor leader of the People’s Party. “President Park must make a public statement, and the responsibility of the officials involved should be investigated.”

“The humidifier sterilizer scandal is clearly a man-made disaster resulting from the indifference of companies [to public health] and the government’s neglect,“ said Woo Sang-ho, floor leader of the Minjoo Party of Korea.

His call was echoed by Minjoo Rep. Yang Seung-jo, who called for a “sincere apology” from Park and the ruling party.

Three floor leaders will meet with Park on Friday, and the opposition leaders are likely to push their demands on the scandal.

The main opposition party has been calling for a special committee in the 20th National Assembly, which commences on May 30, to investigate the sterilizer scandal. It held a hearing with victims and their relatives at the party’s headquarters on Monday.

The ruling Saenuri Party decided in a consultation with the administration Sunday to call for a National Assembly hearing on the scandal after a prosecution probe is completed.

Such moves are bound to accelerate after a revelation Thursday morning by a civic group that state-owned health institutes may have made errors in their initial investigations into the medical problems caused by inhaling the sterilizers.

After the Korean Centers for Disease Control and Prevention first linked a nationwide outbreak of mysterious pulmonary illnesses to the sterilizers in 2011, the Ministry of Health and Welfare issued a press release warning consumers about sterilizers.

The Health Ministry announced that an inspection by the Ministry of Food and Drug Safety showed that one sterilizer product, Butterfly Effect’s Cefu sterilizer, contained PGH, or oligo (2-(2-ethoxy)ethoxyethyl) guanidinium chloride, which is harmful to humans when inhaled.

The Asian Citizen’s Center for Environment and Health on Thursday said the claim may be wrong and that the sterilizer may not contain PGH.

“I do not know who Butterfly Effect is, but they must have imported another component [PHMG] from China,” said Dam Gaard, former CEO of KeTox, which closed down after allegedly going bankrupt two years ago after Denmark banned the use of PGH. He was quoted by the Asian Citizen’s Center.

PHMG is a toxic chemical found in other brands of humidifier sterilizers.

In response to a question of whether he sent any samples of PGH to Korea, he answered, “Twice, less than 40 liters [10 gallons] in total.” He said the Korean importer told him it was for “agricultural use.”

Although the prosecutors’ investigation will have to confirm the civic group’s claims, these revelations are guaranteed to ratchet up the heat on the Park Geun-hye administration.

The ruling party’s Kweon Seong-dong, who is also an administrator at the National Assembly’s Environment and Labor Committee, called on politicians to stop using the scandal for political purposes.

“Yoon did not utter one word of apology for the careless management of the Environment Ministry, which is responsible [for guarding against harmful chemical products],” Lee said in a published briefing on the party’s official website. “He merely blamed companies, describing the humidifier sterilizer scandal as a ‘disaster resulting from mercantilism.’”