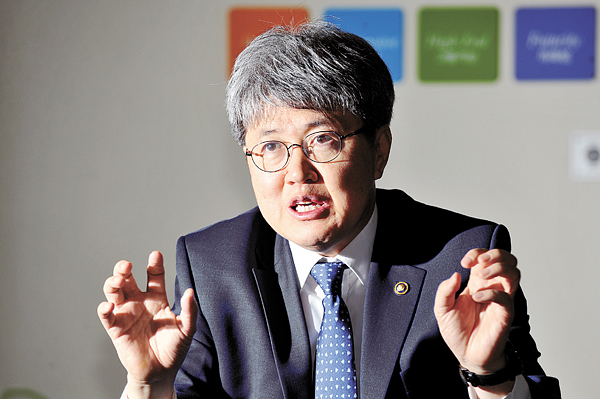 Yoo Gyeong-joon, the commissioner of Statistics Korea, is planning an ambitious reform of his agency.

In an exclusive interview with the JoongAng Ilbo, Yoo made the point that statistics regarding the country’s gross domestic product (GDP) and gross national income (GNI) should be compiled by the statistics agency and not by the central bank, as they are now. The national account was initially handled by the Bank of Korea (BOK), he said, because of a decision made by the U.S. military back when Statistics Korea didn’t even exist.

The national account is like the fiscal balance sheet of a country, providing an overall view of its economy. The account shows how much individuals, businesses and the government earned and spent for a certain period of time. It includes the GDP, GNI, capital inflows and outflows, and overseas transactions of a country.

The BOK has been keeping track of the figures for nearly 60 years. Based on the statistics, the central bank has been announcing the Korean economy’s official growth figures.

Yoo’s claim is making public a tug of war between Statistics Korea and the BOK. Earlier in April, the commissioner made the first attempt to start the war by saying at a press conference that there is a need to incorporate statistics regarding the national income by the BOK and regional income by the statistics agency.

However, the possibility of the BOK giving up its power regarding the most important economic statistics is fairly low, despite Yoo’s strong determination.

The following is an excerpt from the interview, which was held to mark the first anniversary of his term at the Daejeon government complex.

Q. Doesn’t the national account belong to the BOK?

A. I think it will be better for the BOK to concentrate on much higher value-added work regarding monetary and credit policies. It might be viewed as a fight for rice balls, but I think that Statistics Korea can increase overall efficiency by taking the job. I will discuss this with the BOK.

It is highly questionable whether the BOK will agree or not. What is your opinion?

We are running a dual structure in which our agency is producing basic statistics for the national account while the central bank is producing the final statistics. I am concerned about possible overlaps in the gathering of information, expenditures for personnel and distortion of results.

Korea and Belgium are the two countries in the Organization for Economic Cooperation and Development with central banks writing such statistics. Even in Belgium, a joint committee between its central bank and statistics agency works together on the country’s national account.


So what is your suggestion for changing the national account statistics?

Quantitative indicators aren’t enough. We need a new indicator that reflects the quality of people’s lives, something like the Better Life Index or Beyond GDP. To make such an index, we need to incorporate existing data and indices. There are a lot of factors that are not being reflected when producing the national account.

For example, the economic effects of sharing economy services such as Uber and new values of information produced by developed technologies are not considered at all. Not only the current national account, but also new accounts on the environmental economy and societal economy are needed. To develop the national account, Statistics Korea should take care of it.

What about the national census on the economy slated for this year?

The census is being conducted every five years to provide a road map for the country’s economic growth. There are many things to change regarding the census, too. Statistics for self-employed and small businesses are still poor. Korea has a larger number of self-employed people compared to countries with similar economic development levels, and this is because of its aging population and weak social safety nets. Our plan is to enhance statistics for these areas.

The latest census will come up with more systematic approaches for small businesses by region and industrial sector. We will create the Business Register, a new registration system that offers registration numbers for small merchants and self-employed businesses.

How will this differ from the current business registration system run by the National Tax Service (NTS)?

The number of NTS-registered companies and those counted by Statistics Korea often do not match. We are in talks with the NTS to align these registration systems. If impossible, we could think of establishing a separate body in charge of business registration, as in France.

There is criticism regarding unrealistic unemployment rates by Statistics Korea. How do you respond?