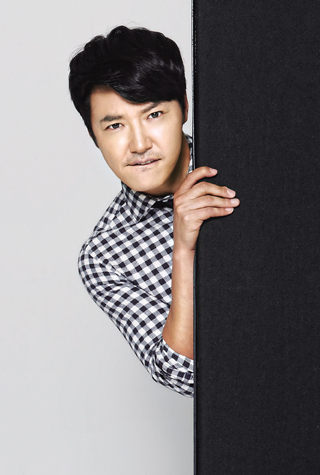 Actor Yoon Sang-hyun of the recently finished drama “Ms. Temper and Nam Jung-gi” has not only made a successful comeback to the small screen after taking a two-year-long break, but also released his first digital single album earlier this month.

The actor, who wants to become a singer as well, told Ilgan Sports, an affiliate of the Korea JoongAng Daily, that this EP is his first step in showing more of his musical talent.

The JTBC drama, which again brought Yoon to the forefront, was extra meaningful for him as it was his first project since he became a husband and father to a daughter. In the drama, which showed the power game within a cosmetics company between managing directors and employees, and between the company’s marketing team and its clients, Yoon played the role of assistant marketing director, Nam Jeong-gi.

“This time, I felt more responsibility than ever as now I have my own family, wife and daughter,” said the actor, who even cried while watching the last episode with his fellow staff members, as he put a lot of effort into filming the drama.

“My daughter will watch my shows later, so I couldn’t neglect anything [while filming.]”

Q. Did you do anything differently this time?

A. I especially tried to focus more on using my eyes. I used them so much, twice or three times more than I usually do. I think if I hadn’t done it, the drama wouldn’t have been as much fun. It was my first time realizing that using your eyes can play a great role in acting.

How do you sympathize with the character you played?

I think almost all Korean men could sympathize. Before I became an actor, I also went through some tough times. Just like Nam in the drama, I was rejected when I needed help from someone else. I cried a lot after reading the scripts for first and second episodes. Then I decided that I could really play the role well. This drama really is something that makes you want to laugh and cry at the same time. Many scenes are really sad, but those became ironically funny when comical elements are added.

Why include comical elements?

I don’t like doing the same tone of acting throughout the entire drama. So I try to make scenes that may look dull become more interesting. A person in a real life cannot have cool facial expressions and catchy lines every day. So I thought dramas should show that there are times you want to laugh and times you want to cry.

Aren’t you worried that people might just remember you as someone who does comical acting?

It’s not that I try to make people laugh intentionally, but I just try to act in a way that suits the entire scene. People felt this drama - which included many sad and helpless scenes - was funny, and I think that’s because I really put my sincerity in it and the audience appreciated that and found the drama funny. I think that’s my style.

I feel like I [waited] too long. It is the first time for me to release a digital EP in Korea. From now on, I’m going to continue doing some music so that I can become a singer and an actor. I do like to sing, so I don’t want to let this go. I’ve been getting lots of offers from music shows these days. I also got an offer to compete on MBC’s music show “King of Mask Singer,” but I’m still debating because there are so many talented singers on it. For now I’m trying to do more radio shows.

Did your wife help with the album?

She has self-confidence, while she knows how to be nice to others. She helps me on things that I do in a clumsy manner. I don’t do well with organizing my ideas when I talk. When I tell her I have an interview, she will text me with expected questions and answers I should deliver the night before. When I see such texts, I realize I really married well.

What’s your goal as an actor?

I think the audience notices when you really put in your best effort. I felt that a lot while filming this drama. There are many characters I have not yet played, and there are so many genres I want to try. I need to step up each time and see how far I can go.