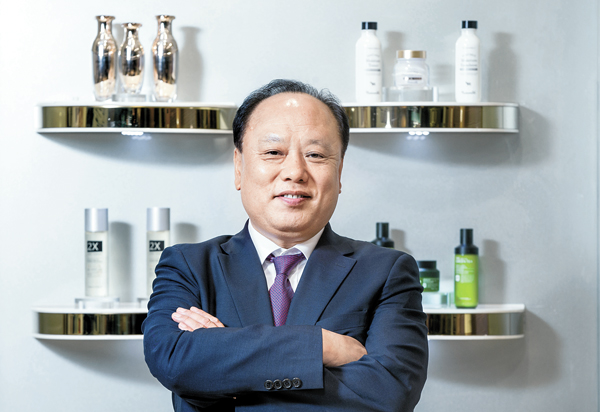 Tony Moly’s founder and chairman, Bae Hae-dong, posing with the company’s cosmetics products at its headquarters in Bangbae-dong, Gangnam. The company celebrated its 10th anniversary this year. [KIM SEONG-RYONG]

AmorePacific, one of South Korea’s top cosmetics companies, isn’t the only Korean cosmetics developer making a splash in the global market.

“The local cosmetics market has been completely saturated,” the company’s chairman said, “and we will face difficulties unless we expand in the global market.”

Bae’s ambition has started off strong as the company has already started selling its products on May 13 at 825 Sephora stores in 14 countries across Europe.

Sephora is the world’s biggest cosmetic store, run by the French luxury goods conglomerate LVMH Moet Hennessy Louis Vuitton SE. It is known that having products sold through Sephora is very difficult, and not only is the bar for entry high, the business terms are also known to be quite rigorous. It’s worth the effort, though, as setting up shop with Sephora is somewhat akin to being scouted by the Major Leagues.

But according to Bae it was Sephora that first approached the Korean cosmetics company instead of the other way around.

“Last year a manager at Sephora came to us and made the proposal,” Bae said. “They said they would sign a one-year contract giving them exclusive sales rights to Tony Moly while also financing all advertisement and promotional events.”

Tony Moly was first founded in 2006, but from the start Bae targeted the global market, unlike other cosmetics companies that aim largely at local consumers before going global. The first target was Asia, including China, Hong Kong, Taiwan and Japan. Then in 2014, Tony Moly opened up its first shop in North America in Manhattan, New York.

And this year the Korean cosmetics company finally entered the European market.

The secret to Tony Moly’s rapid rise? According to company’s chairman, it’s all about quality.

“Other people easily sell cosmetics with simple concepts,” Bae said. “I started off as a manufacturer that made [cosmetics] containers and because of my background, I just couldn’t forgive myself for poor quality even if I’m lenient on other issues.”

Bae started off his career at the Korean cosmetics company Julia, but started his own company making cosmetics containers in 1994 before founding Tony Moly one decade later. But the beauty industry needed more than just quality. Bae says it needed that extra appeal and that he found it by making the design of his containers more fun.

Tony Moly started making cosmetic products with containers that looked like fruits such as bananas and tomatoes. A lip balm was even designed to look like a huge pair of lips.

Other than Europe, Tony Moly’s sights are now also locked on the Chinese market. The company plans to build a cosmetic factory there that will be operating in 2017.

“We expect enormous performances once the Chinese manufacturing plant, which can produce 500 million products annually, is completed,” Bae said.

This year the company is trying to reach sales of over 260 billion won and hopes to raise that to 1 trillion won by 2020.

“[Customers] today want more than just to be beautiful,” Bae said. “They want to be fun, as well. Beauty with wit and fun is the global beauty trend.”

Bae is confident that Tony Moly will contribute to turning Seoul in to the world’s center for beauty products while also leading the globally-rising K-beauty trend.