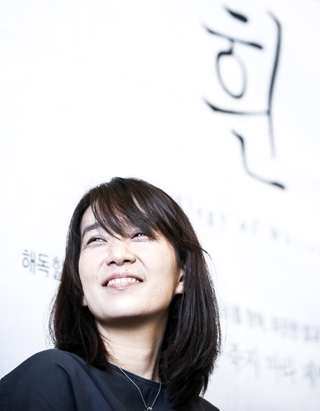 Award-winning novelist Han Kang at a press conference Tuesday in Seoul, where she shared details about her newest book, “The Elegy of Whiteness.” The novelist recently won the Man Booker International Prize for her novel “The Vegetarian.” [PARK JONG-KEUN]

“I completed ‘The Vegetarian’ 11 years ago. Speaking for myself, I walked away from the novel while working on other novels,” author Han Kang said at a press conference yesterday. “I didn’t expect to win the prize at all.”

It was the first time she spoke of her famed work since returning from the United Kingdom, where last week she was awarded the Man Booker International Prize for the English translation of the book.

Today, Han’s latest novel is being released. Titled “The Elegy of Whiteness,” it focuses on pure things that cannot become dirty: transparency, life and light.

“I wanted to look at a certain point where people are bright and dignified,” she said.

She mentioned that she wrote the book while staying in Warsaw, Poland, around the fall of 2013. Living in a reconstructed city that had been totally destroyed by war in 1944, she thought of her older sister who died at birth. This novel explores the life, death and purity she wanted to give to her baby sister, “if I were allowed to give her some parts of my life,” she explained.

The new novel is delivered in a strange form - some parts are like prose, while other parts are poetic; but Han says it wasn’t her intention. It is a book that may lack narration of the story, she said.

In fact, her novels are all connected, each one raising a new question at the end. “‘The Vegetarian’ starts with the question of whether people can bear the world combining violence and beauty, and it ends with the longing for an answer from the perspective of Young-hye’s sister, In-hye,” she said. 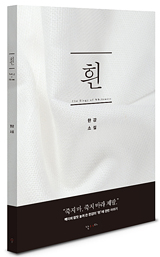 The cover of “The Elegy of Whiteness.” [NANDA]

Her next novel was “Breath Fighting,” published in 2010, which tried to provide the answer to the question she asked in her previous novel. In her following novel, “Greek Lessons,” she started with another question in mind, asking, “Which aspect of life people should pursue as they live?”

In “Human Acts,” published in 2014, Han described people who struggle to live with dignity even as violence persists around them. Then, the next novel raises a new question regarding dignity.

Despite all the keen interest in her lately, Han doesn’t seem to falter.

“I want to go back to my work as soon as this conference ends,” she said. “I deliver my messages in writing in the form of books; I believe that writing silently in my room is the way to overcome [all this attention].”

Han also mentioned her hopes for readers in Korea. “I have been pushing forward with the question I had 11 years ago, and still want to go forward. Hopefully, I wish people can read other books by my fellow writers whom I respect a lot.”

She continued, “I think when people perceive every scene, behavior and movement of characters as questions, there is no literature that is difficult or boring.”

The book will be published in the United Kingdom next year in English.