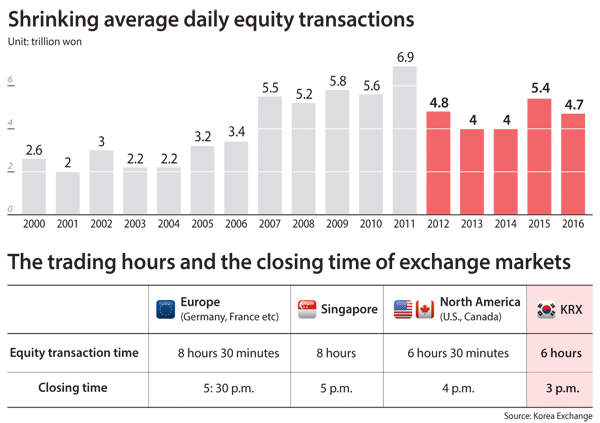 In hopes of encouraging investors to be more active, the Korea Exchange (KRX) has decided to extend the closing time of Korea’s stock markets by 30 minutes.

According to the sole market operator on Tuesday, the closing time will be changed from the current 3 p.m. to 3: 30 p.m. starting in August.

This is the first time in 16 years that the hours will be changed.

In 2000, the operator ended the hour-long lunch break that began at noon. Since then, the stock markets have been trading equities for 6 hours, between 9 a.m. and 3 p.m.

In a statement, the KRX said that the Korean markets are currently operating at least 30 minutes and at most two hours and 30 minutes less than other major markets. Additionally, the closing time was between one and three hours earlier than other markets, including those in Asia. While the Chinese markets close an hour later than the Korean markets, Hong Kong’s markets close at 5 p.m. and those in Singapore end at 6 p.m.

KRX said the goal is to increase the markets’ overlap with the operating times of other Asian markets, thereby strengthening the global competitiveness of Korean markets.

The extension of the closing time is expected to increase liquidity in the stock market between 3 percent and 8 percent. This would translate to additional daily trading of between 260 billion won to 680 billion won on average.

The local stock market has been losing appeal as the benchmark Kospi has been doing a box step, with its daily trading moving between 4 and 5 trillion won over the last decade.

Korean investors’ overseas securities depository balance grew from 9 trillion won in the first quarter of 2012 to 25 trillion won by the end of 2015.