Diesel price pits ministries against each other

Diesel price pits ministries against each other 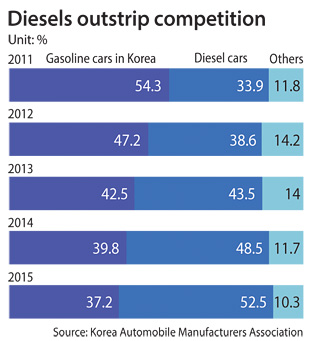 Disagreement reigns between government departments over whether to raise the price of diesel to discourage Koreans from buying vehicles that use it, since cheating by Volkswagen and more recently Nissan on emission tests showed how dirty the fuel really is.

Vice ministers from the Ministry of Environment, Ministry of Strategy and Finance and Ministry of Trade, Industry and Energy gathered Wednesday to discuss the issue of reducing pollution. The meeting took place after President Park Geun-hye earlier this month ordered the government to come up with solutions that would reduce ultrafine dust including emissions from diesel-fueled vehicles, which now account for more than half the cars on the roads of South Korea.

Korean vehicles have been highly popular in recent years because diesel fuel is cheaper than gasoline and, until the emissions scandals, was considered relatively clean.

The Ministry of Environment is proposing to raise diesel prices, which are currently 85 percent the price of regular gasoline. The ministry has argued that current measures, which include an annual charge of 100,000 won to 300,000 won on diesel cars for environment protection purposes as well as increasing benefits when pollution reduction equipment is installed or old diesel cars are scrapped, are not enough to reduce sales of diesel cars. The environment ministry wants to implement higher diesel prices three years from now.

The Finance and Energy Ministries, on the other hand, oppose the idea. They fear a backlash from a hike in diesel prices because the people most affected will be in lower income households that depend on diesel-powered commercial vehicles, as well as the overall transportation and retail businesses. Additionally, raising diesel prices can be considered raising taxes, which President Park promised not to do during her campaign to win the presidency.

Since the government allowed sales of diesel-powered passenger cars, they have been very popular. European brands like BMW, Mercedes-Benz and Volkswagen convinced consumers that “clean diesel” technologies allowed the cars to be more environmentally friendly than in earlier years, with stronger engine power.

As a result, registration of newly purchased diesel cars exceeded the 50-percent barrier last year for the first time. They accounted for 52.5 percent of new cars sold last year and gasoline cars only accounted for 37.2 percent. This was a stark contrast to 2011 when gasoline cars accounted for 54.3 percent while diesels only took up 33.9 percent. German cars are the top selling imported brands. Among the Mercedes-Benz cars sold in Korea, 71.3 percent were diesel-powered, while for BMW the figure was 84.1 percent, for Volkswagen it was 85.6 percent and for Audi 92.3 percent.